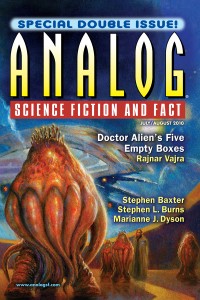 I’m being very selective in my reading of Analog these days, a task made easier by the fact that the vast majority of the stories are by Analog regulars, and you pretty much know what you’re getting. So with all due respect to Vajra, Burns, Dyson, Carter, Frederick, Aiken and Cooper, the only story I’m reading this issue is by Stephen Baxter.

Baxter’s output is prodigious, and I’d be fascinated to find out how many words he manages per day when he’s writing. He’s clearly not one of those writers who struggles to get more than a couple of hundred words down each day. Here he produces a story that could quite easily be presented as a missing Quatermass story from Nigel Kneale. A series of characters are introduced at breakneck speed in the opening paragraphs, set mere minutes from an underground detonation of a nuclear bomb.

It’s set in 1960, near Newcastle upon Tyne, and there are locals (including a one-legged elderly woman who survived the worst Hitler could throw at her during the Second World War, and is able to set up an army of Geordies to march on the base), American and British soldiers, local bobbies, local amateur seismologists, a wise-cracking civil servant working for a hush-hush section looking into UFOs, and more besides. The story moves along at a cracking pace, requiring the reader to engage with a story very much in the style of British tv and film dramas from 50 years ago. I struggled a bit at times, but surrended to the potboiler – I’d be interested to see what others less familiar with that style of drama made of it.