May 16, 2002Leave a Comment on Spectrum SF 8Magazines, Reviews 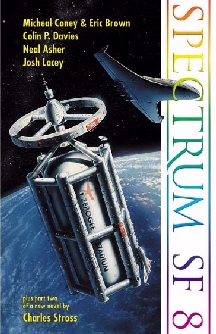 A short speculative fiction tale. Salvation is offered to those who are willing to undertake the three day journey to Titan, a journey on a most peculiar train in which the travellers must not fall asleep. Fine whilst it lasts (which isn’t long), although it suffers IMHO as does much speculative fiction in that without any underpinning theoretical foundation, or world-building constraints, the story has the freedom to be as enigmatic as it wishes.

Neal Asher. Snow in the Desert.

A mixture of High Plains Drifter and Dune, in which an albino gunman travels the desert, a price on his head. Actually, the price is on his cojones, as his DNA is attractive to others – the reason: his longevity. His gun-totin’ skills have kept him one step ahead of the bounty hunters to date, until he faces some very professional characters. He is saved (in more ways than one) by a mysterious female, who offers him a chance to escape his planet.

A well told story, although with a bit of a feel of being in a graphic novel. The only quibble for me being the rather Hollywood type denouement, with the female gunslinger having Terminator II-type capabilities, which rather balances the odds in their favour!

This was to be the final of a two-part installment of a novel, which is now a three-part installment. Editor Paul Fraser has helpfully offered to supply a PDF version of the final instalment to subscribers, and I was also able to read the story to conclusion in this way.

I don’t as a rule read novel instalments in magazines, but rules are made to be broken, and as Charles Stross is one of my favourite authors of the moment, I snuggled down with this magazine, and then had a read of the PDF instalment on screen.

Stross has had a series of his ‘Manfred Macx’ stories in Asimovs of late, but this story harkens back to some of his earlier fiction – particularly the mathematic fun he had in ‘Antibodies’ (Interzone, July 2000), and the eldritch horrors in ‘A Colder War’ (Spectrum SF3).

The bowels of the British civil/secret service contain a branch whose interests involve using a robust scientific magic to ensure that the lurking eldritch horrors from other dimensions remain just that – from other dimensions. Dealing with excursions into our reality is their daily job, and the protagonist finds himself moving to the front line in the battle against Nazis who have been lurking in a Castle Wolfenstein-type castle in another dimension, when an American scientist of whom he was become fond, is snatched in order to be used as a sacrifice.

Rather more suspension of disbelief is necessary than in other Stross stories, but the novel is an enjoyable romp which entertains throughout.

Josh Lacey. A Night at the Movies.

Again, more speculative than SF. A tough of the Ballards, with a background of societal deconstruction. A few decades hence, a father’s hobby is to salvage and view old movies, revelling in the sight of large groups of people living in such close proximity. His plan to have a screening with dozens of neighbours present is spoilt by their reluctance to be in such close contact to others.

Michael Coney and Eric Brown. The Trees of Terpsichore Three.

A joint effort from one author whose profile was greatest a couple of decades ago, and one whose current profile is helped by appearing in every issue of Spectrum SF.

A throwback tale in some sense – the plot feels 1950s : an exploration party, trying to decide whether there is intelligent life on a planet prior to terraforming it, is shattered when one of the team is found murdered. Who is the murderer? Suspects abound, but the finger of blame is finally pointed when a sentient tree reacts to the sound of the murderer’s voice. (Asimov would have been proud of that ending!)

The Stross novel is great fun, and Neal Asher’s story is equally enjoyable. The other stories are fine as far as they go, but they don’t really go anywhere that hasn’t been gone before.

May 16, 2002Leave a Comment on Spectrum SF 8Magazines, Reviews