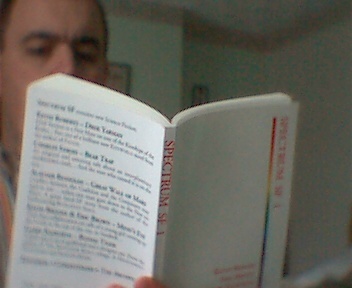 “That’s a funny looking book you’re reading. It’s not one of those Years Best SF books you usually read, is it?”

“A magazine? But it doesn’t have a cheesy picture of a spaceman or an alien on the cover!”

“I keep telling you, SF isn’t all about spacemen and aliens, even though the magazine covers often give that impression.”

“Yes, actually, it is, even though a third of it is given over to the first part of a novel serialization. It’s by that Keith Roberts who died the other week. You know, I showed you the obituary in the Guardian to show you they thought him worthy of serious coverage.”

“But you don’t read SF novels much do you?”

“No, I haven’t got the time. Stick to the best short SF, that’s been my rule for the past ten years.”

“They are a good collection. Charles Stross’ Bear Trap is really my kind of story. A bit like the Steamship Soldier on the Information Front, which Nancy Kress wrote last year and which was highly thought of. I reckon this is better. It’s well written..”

“The story ends pretty abruptly with, to my mind, an ending which really spoils the preceding story. There was a story by Isaac Asimov once called Shah Guido G, that ends with a cringeworthy pun, but after a fairly so-so story. This story actually deserves better. If I’d been editor I’d have asked the author to rewrite the ending.”

“What about the other stories?”

“There’s a jointly authored story by Keith Brooke and Eric Brown called Mind’s Eye which I enjoyed – a young girl risks all to take a chance living on the surface, rather than the subterranean lower levels. It’s well paced and has a really good ending, a sort of cyberpunk thriller.

And Bonsai Tiger by Garry Kilworth is very good. He’s written a huge amount, and it shows – good characterisation, and some neat touches in a story about a jilted lover who tries to come to terms with his abandonment through a particularly problematic pet.

Then there’s Great Wall of Mars by Alastair Reynolds, which is one of the better hard SF stories I’ve read in the last year or two. This author is going to go places – he’s already been in a Years Best SF collection twice with A Spy In Europa and Galactic North, and his story Hideaway is in Interzone July 2000, and that is good, although not maybe quite up to those two stories. This story is set in his Coalition/Conjoiners/DeMarchy milieu, whereby humanity, still limited to the solar system, has had a three-way split, with one part a hive-mind mentality. A ‘nest’ of conjoiners on Mars is under threat from the Coalition, and are desperately seeking escape before the outbreak of war. I’m actually going to pick up one of his novels and check out his other short SF. He’s hot on the heels of Ian M. Banks.”

“What about the rest of it?”

“There’s an ‘archive’ bit at the back, which I’m not too sure about, including very short reviews of some films that have come and gone. I saw Fifth Element when it came out and enjoyed it, but I’m not sure why I would want to read a very brief reference to it.”

“An interesting editorial, written in the style of a dialogue.”

“Really. Hmm, not sure about that.”

“Me neither. The editor, Paul Fraser, doesn’t go into detail as to why he launched the magazine. Did he feel Interzone was lacking in some respect, or did he think there was room in the UK market for two magazines?”

“And what do you reckon?”

“A very good first issue, even without me having read the Keith Roberts novel installment. I suppose if you are launching a new magazine you don’t turn up the chance to publish something by a name such as Keith Roberts, but I would personally prefer two 30 page shorts to a 60 page novel extract.”

“Will you look at the next issues?”

“Yup, I’m going to look at the next issues alongside Interzone, and come to some initial conclusions. But this issue holds its own against recent issues of Asimovs, Analog SF, MF&SF and Interzone.”

For more details of Spectrum SF, visit their website.