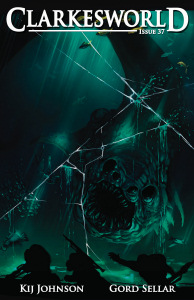 This story won the Nebula Award for Best Short Story last weekend. I hadn’t read it before then (although technically I haven’t read it myself yet). If this applies to you, then stop reading, and head over to the Clarkesworld site to read it now. One word of warning though, if the first sentence puts you off, then you may wish to stop reading. I wouldn’t recommend that course of action, because you will miss out on something special, but fair to say it is likely to be one of the most challenging stories you’ll read.

I haven’t actually read it, as I realised on a long train journey yesterday that I had it on my iTouch as a podcast from Clarkesworld, so I plugged myself into it, and listened to the story. (And click here to listen yourself).

I have to admit to not being much of a fan of stories being read, so don’t listen to that many podcasts. I personally don’t get on with a traditional narrative, with characters and dialogue, being read to me, as such stories are clearly been written to be read, rather than listened to. Where it does work for me though is where the story is in effect a monologue, and internal narrative, so you’re really listening in to someone else’s thought processes.

The Clarkesworld podcast is read by Kate Baker, who does a great job. There’s little point in describing the story, as there’s not a lot to describe, and it’s there for you to read. What the story is though, is intense (which is true of very little SF), appropriately explicit in a very adult manner (ditto), and emotionally draining (ditto again). What it also does is make a lot of xeno-linguistic SF, and human/alien relationship SF looking rather shallow. It’s about 35 years since I read Philip Jose Farmer’s ‘Strange Relations’, a collection of stories that looked at intimate relations been human and alien. Suffice to say that this story is up there with that standard. Perhaps too challenging for some readers, and I hope that we don’t see the floodgates opening for xeno-sexual SF, but Best SF Kudos to Kij Johnson for writing it, Clarkesworld for publishing it, Kate Baker for reading it, Apple for putting together some kit that makes it easy to get to hear it (although getting to read stuff on their kit is just too silly for words)