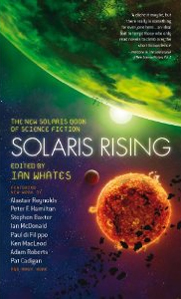 British publisher Solaris put out three anthologies of new SF edited by George Mann in the years after the imprint was set up. You can can find reviews of ‘The Solaris Book of New Science Fiction’ Volume 1 (here), 2 (here), and 3 (here).

They’ve now got a new editor, Ian Whates, who has had a series of excellent anthologies under his NewCon imprint, and launched a new (improved?) anthology of new fiction. Rather than sticking with the original series title, they’ve moved the New in the title, so what we have here is ‘Solaris Rising : the New Solaris Book of Science Fiction’. And content-wise they’ve got some bigger names than was the case with the previous series. The cover announces Alastair Reynolds, Peter F. Hamilton, Stephen Baxter, Ian McDonald, Paul di Filippo, Ken MacLeod, Adam Roberts and Pat Cadigan. There are also stories from up and comers like Tricia Sullivan, Lavie Tidhar and Jack Skillingstead, as well as other established writers.

So, if the writers in the volume provide anything like their best, this should be a doozy of a collection. I’m reading the stories in order and pasting the reviews below, with a summary at the end. But with an editor, publisher, and collection of authors whose pedigree is beyond reproach, then you should really be buying the book yourself (skip to the conclusion if you want confirmation!) : amazon.com | amazon.co.uk

Ian McDonald. A Smart Well-Mannered Uprising of the Dead.

McDonald takes us to Africa for a clever story in which it appears that the voices of the dead are being raised in objection to corruption in the government. He gets the voices of the dead just right, a homely indignation at the moral laxity, with sideswipes at the economics that are currently providing a challenge, not an opportunity, to the majority of the people in such countries.

Something quite strange has happened at a particle collider in the States. We don’t find out exactly what to start with, as the story starts with a vivid image of roiling clouds contained above a Point Zero, and a protagonist who is able to move between ‘places’. The story and the explanation unfold nicely, with some strong human characters in it, and the tension ramps as the impact on the two primary characters is explored.

I’m not finding as many di Filippo stories to read as I would like, which is a shame, but it’s nice to be welcomed by an opening paragraph that tells you that your going to get his slightly-gonzo world view :

“The way Arpad Stroll discovered his unique ability to identify and utilize universal sweet spots involved the unlikely confluence of his unrequited love for Veronica Kingslake, Mrs. Christelli’s physics class, the apelike antics of Willy Squidgeon, half a raisin bagel, an errant shaft of sunlight, a coloured marker, a pair of cheap shoes, and a host of other unquantifiable factors, many of which were unknown to Arpad himself – at least on the conscious level.”

Suffice to say, that Arpad gets the kind of control over events that every pubescent male teenager fantasised about (my unrequited love for V***i L****o remains unrequited almost four decades on..). But the background to him obtaining these powers is a global threat to Earth, and the question is whether he has the powers to do more than satisfying his teenage hormones.

Ken MacLeod. The Best Science Fiction of the Year Three.

You always get some thought-provoking politics with MacLeod, and here he pops in some near-future background to give depth to a story involving an SF writer and an anthologist. The French have had another of their left-wing revolutions, and America has retreated further into their right-wing fascist state, and the protagonists are on either side of the divide. There’s a scientific demonstration at the end – but what it demonstrates is not what it appears to do. Hopefully we’ll see ‘The Best Science Fiction of the Year Three’ in next year’s ‘Year’s Best SF 17′, which would appeal to my perverse sense of humour.

Tricia Sullivan. The One That Got Away.

A very strange, surreal, dream-like story – you finish reading it, and think to yourself, as you do after some dreams, just where on Earth did that come from?

A beach is the setting for the story, with the media and the public gathering on a daily basis to watch people foraging on the shoreline. The foraging is a dangerous business, and Gran has been doing it for many years. There’s something to be found, and it’s a sort of panning for gold, except that they’re looking for something called ‘core’ and it’s about the lost godhood. I might well come back to this after a few weeks for a re-read.

Neat story with a nod to Ian. R. MacLeod’s ‘Starship Day’ from the mid-90s.

Young Matt wakes up, but finds that things are not as they should be. The high-tech nano wizardry that is a part of life in the near future is missing, his house is empty, and covered in dust. He explores the city of Liverpool, trying to make the sense of the reality that he is in. The Rock Day of the title is a key to what has happened, with humanity finding out some answers to some pretty big questions, but the act of asking…

The introduction to the story refers to Palmer’s novel Urbis Morpheos and includes the word obtuse and odd, which rather describes my reaction to this story, which didn’t quite work for me. Quite a bit of stuff happens, and then in the final couple of pages a lot is revealed, leaving me not much the wiser.

Adam Roberts. Shall I Tell You the Problem with Time Travel.

Clever and amusing time travel story, if you accept that the scientists involved don’t quite have the same grasp on the relationship between cause and effect that you would expect.

Lavie Tidhar. The Lives and Deaths of Che Guevara.

In Tidhar’s imagination (something he gives free rein to in his fiction) not only does the revolutionary spirit of Guevara live on after his death, but he does himself, through cloning, to be found wherever oppression is to be found, and in the end, looking further to the future.

A father with his own substance abuse history finds his son’s experimentation with drugs has put him at grave risk. In taking the drugs himself, the father experiences some issues from the past, overlapping with reality.

Shorter story in which a young woman leaving Earth on the first colony ship has to work out how to take part of her culture and history with her, and come to terms with the separation from her sister. It’s a shorter story, and skims through the issues quickly.

Steve Rasnic Tem. At Play in the Fields.

An interesting story, which follows a young man who wakes up far, far into the Earth’s future. He’s been in suspended animation following a botched surgical procedure, and has only been reawakened due to the technical skill of some very alien creatures who are now on Earth, with humanity in much reduced circumstances. It’s well told, and the closing metaphor of doors which have to be closed to provide protection, works well.

Cadigan takes a look at collapsed wave functions, and wave functions that have collapsed but which people aren’t aware of. Not instantly promising material, but the setting, and the characters work well, as we begin to realise what is about to happen/has happened, the tension mounts to give a very focussed human perspective on a global event (can it really be ten years ago?!!)

A neat murder mystery against a temporal confusion backdrop, that would work well as a one-off TV drama or move (tout those rights!). Something very, very strange has happened – humans aren’t living their lives on the usual ordered day after day model, but rather the days are happening in a random order for each individual. As if this isn’t bad enough, everyone knows the day that they will die, but just don’t know when that day will arrive.

There’s a murderer stalking the streets of Brighton, killing people moments before they were due to die, but having them die at his hand, rather than the forewarned event. A cop has to work out who is doing this, and how/why, at the same time as facing his imminent forecast demise.

A one-way portal to a strange, strange world offers a challenge to the team that make the journey, and there’s touch of the Lovecraftian Mountains of Madness in the eerie, almost-deserted city through which they roam, as the team gradually dwindles in size.

Brooke and Brown were regulars in the David Pringle-era of Interzone, and this is a story that could be straight from one of those issues. A politician returns to a planet he had visited many years ago – whilst he has rejuvenation tech which means the years have been good to him, those he meets have of course aged. However, the people on the planet, the one source of the chemical that enables rejuve treatment, are quite happy with their limited timespan. The politician has news to break to them, but with the aid of the indigenous creatures, he is able to come to a decision about his own future.

Alastair Reynolds. For the Ages.

Whilst most of us worry about things like what to have for tea, Alastair Reynolds worries about things like – ‘what happens in the far future when the universe has spread so far apart that it’s impossible to see other galaxies, so the inhabitants of one galaxy will think they are completely alone!’

Having raised such an issue, he then, fortunately for us, sits down and writes a great story (rather than an academic paper or conference presentation) to resolve the issue. And, as ever, he is able to put the human element strongly into the story, with a strong pinch of politics, as a team of humans endeavour to make a mark that will last through the aeons.

Long may he continue with his short story writing!

Peter F. Hamilton. The Return of the Mutant Worms.

Hamilton closes out an excellent volume on a lighter tone, with an author who has turned his back on his early days in SF, as he hits the mainstream. He finds, to his horror, that a very, very early work of his is about to return, zombie-like, to haunt him.

An excellent collection. Nineteen stories, with only a couple which really don’t hit the spot, the others ranging from good, through very good, to excellent. Solaris Books also published ‘Engineering Infinity’ earlier this year, edited by Jonathan Strahan, and in my review I pondered ‘I’d be surprised if there’s a stronger anthology in 2011’. Well, the same publisher has produced another anthology that is up there with it.