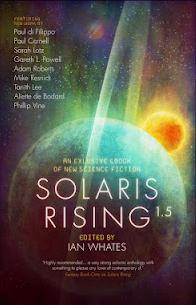 The good news is that not only is a Solaris Rising 2 scheduled for 2013, but that an e-book to whet the appetite has been published between volumes, a clever way of raising profile for the series.

I’ve Kindled 1.5 onto my iPad, at only £3.50, less than a pint of beer in London these days. Considerably less if you buy a 6%abv pint of stout from a craft beer emporium off Hatton Lane. You may wish to avail yourself of the title, and herewith the Amazon links.

Adam Roberts. What Did Tessimond Tell You?

The aforementioned stories having looking at the birth of spaceships powered by/linked to human minds, de Bodard takes us to the other end of the lifecycle, as warrior Nguyen Dong Huong, whose The Tortoise in the Lake is her fourth ship in her relatively short life, has the task of accompanying the Northerner vessel ‘The Two Sisters in Exile’ to its funeral.

Her visit to the Northerner planet is a suprise to her, as is the age of the ‘Two Sisters in Exile’, and the implication s of that longevity, and the response of the Northerners to its death. The story has literature and poetry and feelings at its core, rather than warp speed, photon torpedoes and the like, and along with Jay Lake’s short SF featuring humans facing human issues in future settings, one of the kinds of SF that I look forward to reading.

An alternative take on the civil war those crazy gun-totin’ Americans had.

An elderly female farmer in South Africa feels vulnerable when her guard dog is poisoned. Fortunately her daughter has a replacement, albeit not a canine one…

Vine muses on the muse. I’m not entirely sure to what effect, as it is one of those odd stories that just doesn’t grab me, and after half a dozen attempts to get into it that end up with me in an altogether different place mentally than the story he’s trying to tell, I gave up!

Short and quite lightweight look at a message from the stars.

Paul Cornell. A New Arrival at the House of Love.

Cornell bodaciously envisages a world in which almost anything is possible, and indeed the impossible does happen, with a cast of memorably strange characters and an epic DOOM! to withstand.

Paul di Filippo. A Palazzo in the Stars.

The First Men in the Moon from an Italian perpective, which of course involves beautiful scenery, food, and a molto bella lady with attitude (this latter being a Filippian requisito).

An excellent collection, more than whetting the appetite for Solaris Rising 2, due Spring 2013.