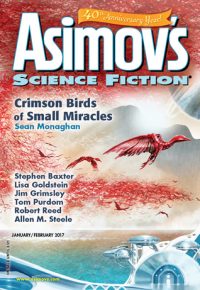 A story that didn’t quite grab me.

It’s very far future, set on an alien planet, but it would take no time at all to rewrite an odd paragraph and sentence to make it a contemporary story. A father is staying in a hotel with his daughters, and it feels very much like any 20th Century hotel in the USA. He has issues with both daughters, especially the younger one who has a life-limiting medical condition, and they are on-planet to see if the art show to which the title refers, can enhance her life.

The story isn’t as maudlin as it could have been, and the ending does go the right way (ie in not finding a medical cure), but it feels a little as if it is running on rails, and you know the destination well in advance, and there isn’t that much of a view out of the window (not sure when this train metaphor came from!).