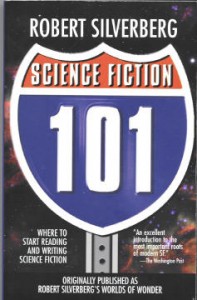 Hmm, I’m not *absolutely* sure what the exact title of this reprint volume is, as the spine, cover, inside cover and title page all have variations. Perm any of the following ‘Robert Silverberg’, ‘Science Fiction 101’, ‘Where to Start’, and ‘Worlds of Wonder’. I am more sure that the original 1987 edition was called ‘Robert Silverberg’s World of Wonder’.

Whichever title you choose doesn’t really matter as none of them are really accurate. The book is a collection of those short stories from the 1950s primarily which Silverberg chose to highlight high quality short SF from his early days as a tyro writer. He introduces the anthology with a lengthy description of his journey from an enthusiastic, and eminently precocious, pre-teen, to a precocious and prodigious writer not many years later.

Each of the stories is followed by a length lit crit in which Silverberg identifies the key components which make the stories as good as they are.

So which stories are put forward?….

Four in One. Damon Knight.

A story that leaps out at you as giving only the barest sign of showing its age. Almost 50 years old? It could be slipped into the pages of Analog this year without anyone spotting its age!

I can’t possible hope to get within a country mile of Silverberg’s lit crit (damn the man!), but suffice to say that the story leaps out at you straight away. A crew of four who are exploring a planet prior to colonists arriving, pitch head long into a gully and *into* a gelatinous life form that rapidly ingests them. The four are contained within the lifeform, brains and nervous systems, and little else. Straight out of The Twilight Zone..

There follows a struggle between the four, two against two, for the right way to deal with the crisis.

From the outset you know that you are reading a thing of beauty created by a master. The rhythm of the story is in your face right from the start, and, as with the first story, you feel you have to check the data again – and yup, 1954.

Not that long after Asimov was writing his fairly ponderous robot stories, we have here something quite different. A dubious character and his android flee the scene of brutal murder after brutal murder. But the opening words set the scene: “He doesn’t know which of us I am these days..”

A change of pace, and how. There isn’t much in the way of plot, simply a slow build of tension.

A famous chanteuse has been horribly, horribly burned, and has been rescued from death’s door through a radically new procedure – by having her brain transplanted into a robotic form.

There has been no attempt to make the robot at all human-like, so how will the protagonist, and the world at large, react to her/it?

A how will she in turn react to her new self, and the attitude and reactions of others? Can she truly become, and remain, human.

Home is the Hunter. Henry Kuttner.

New York in the not too distant future, in a dog eat dog world. The elite of the city are lead by Hunters, who meet in a macabre and to the death ritual combat. The winner takes the head of the vanquished, and his harem of wives, possessions, and the preserved heads of those the vanquished had slain.

The story is seen through the eyes and internal dialogue of Honest Roger Bellamy. One of the best. But is he the absolute best? And how can he possibly stand up to the challenge of having to make the top of the pile and, once there, know that there are few options at the point – to be knocked off the top (and to have his own top knocked off!), to retire (far from noble), or the ultimate self sacrifice, which enables one to be placed forever in the Hall of Fame.

One of the shorter stories, and a bit of a one horse circus it has to be said. Some very alien aliens watch the Earth people arrive, and the clash of cultures is immediately problematic as each race sees the others as quite insufferably barbaric. And who is to say who is right?

The story is highlighted though by the dreamlike sequence in Alpha Centauri, which gives a true Sense of Wonder, helped by the ‘sound’ of the pock-pock of the chronomoter clicking over, and the richness of the Centaurian language (‘the clinesterton beademung’). Deep joy.

Reading this story again was a pleasure, and the thoughtful essay/homage from Silverberg adds to that pleasure. Interesting to have pointed out, though, the relative weakeness of the ending in comparison to the rest of the story.

One of the chronologically later stories in the volume. The first installment, in effect, of a series of stories which became the novel of the same name. My slight issue with regard to the luscious descriptoin of the banyan-tree ruled far future Earth, with vegetable terrors lurking and swooping, is that the phantasmogorical creations of Aldiss at times come to thick and fast. In the prevoius story the fact that there are so few new words (‘cranching’, ‘habermans’ etc.) adds to their impact. In Hothouse it does at times feel a little that Aldiss’s creative urges have got the better of him.

The weakest in the volume for me. A series of vignettes hit the reader thick and fast – someone pitched naked into a coming-out party, far future xeno-war, searching for a lost treasure in the deserted, dusty city of Therlatch, etc.

The link between the vignettes is revealed at last – they are tests by which candidates for Galactic Prime are judged. (The tests set up by the incumbent, which seems somewhat unfair!)

But the outcome is not as expected – a ‘witless creature with vacant eyes’ is chosen as leader of the free world. (Anyone say ‘pretzel’?)

Early Dick – and interesting to see that even within this otherwise largely bog-standard earth colonist/explorer story there are such strong undertones of the nature of what is real and what is not.

There is no obvious intelligent life on the planet being explored, a most malign presence makes itself known. Unlike the shape-shifting menace of ‘The Thing’, in this case it is inanimate objects which are mimicked, and these objects (microscopes, rugs, belts, cars) are the means by which the number of the crew is reduced.

The final plot twist disappoints a little as it is so obvious and unlikely – you have to Suspend your Disbelief a l-o-n-g ways away to have the ending work!

Another weak-ish one for me. The background to the story is more interesting than the story itself.

In the future the breeding habits of the intellectually less endowed (big families) compared to the intellectually superior (few families) naturally leads to a planet in which the majority of the dullards. In order for society to function, even key roles such as doctors have to be filled by the dullards. The answer to this problem – the intellectual elite create medical instruments with instructions that enable anyone with only limited reading skills to cure all ailments.

The plot hinges on one bag going back in time, and falling into the hands of an alcoholic doctor (hmm, long odds on that happening!). The said doctor is able to use the kit to redeem himself and get back into practice (the redemption told in an excruciatingly long and stiled verbatim newspaper article).

Light of Other Days. Bob Shaw.

A regular question on rec.arts.sf.written is ‘What is the story about the glass that lets light pass through very slowly…”

Interesting to compare with the previous story in that Shaw gets away with pretty much the absolute minimun in terms of story. It doesn’t need any more – the perfect amount of detail to put flesh on the conceptual skeleton.

A frabulous far-future story which Silverberg shows breaks many of the story-telling rules, but manages to get some awe-inspiring sense of far from human beauty within its few pages.

Join Best SF’s ‘Rescue A Book’ campaign and save a book from a fate worse than being left on a shelf: