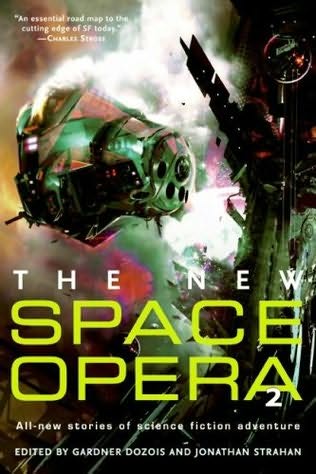 The first New Space Opera in 2007 [review] was a classy anthology, and this new volume starts with a doozy.

Carlotta, once human, a long, long time ago, is revisiting her earlier self – the young girl is in a trailer, living out a mean life on an Earth with bear hours left.

There is an urgency in Carlotta’s visit, as she recalls the nocturnal visit from a ghostly figure which urged her earlier self to leave the trailer, and to take the opportunity to join the rapture that will be offered later.

It’s a plot device that gives an added layer to the story, as we hear of the long, long journey that Carlotta has undertaken/will undertake, but with the young Carlotta not waking before her drug-addict mother’s latest, violent, partner finds his cash stash raided by her.

Carlotta’s journey is one to the end of the universe, and beyond, as the nature of those who will destroy Earth, and their reasons for doing so, are unveiled with a twist at the end of story, matching the twist in the urging to flee that the young Carlotta receives.

It’s a powerful and human story from someone at the top of their form.