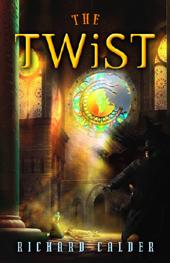 Richard Calder’s purple (at times turgidly so) prose featured regularly in UK magazine Interzone with several lengthy, linked stories appearing in a number of issues. Those stories were fixed-up into the novel ‘Lord Soho’, and, if the letters page of the magazine were anything to go by, divided readers into two camps – those who hated his style, and those who loved it. The editors even admitted that they got more than they were expecting!

I was in the latter camp, finding enjoyment in a style (admittedly at times clearly deliberately over the top) that makes his stories stand out from the majority of SF/fantasy in which style is not something that features. ‘The Twist’ (first published in the UK a couple of years ago, and which makes its first US appearance in this volume) is pure Calder, even to the extent of a single descriptive paragraph which covers more than a whole page.

Calder’s is in many ways a darker, necrous sibling of Ballard. Whist JGB’s best fiction is often infused throughout with fetid, enervating lushness which is taking over civilisation, Calder’s lyrical, verbose style is based on a more fungal premise – a dark, decaying rot in which that which should remain in the ground is brought forth to live. The margins between life and death, dark and light, youth and age, male and female, human and animal, past and future – all are blurred.

‘The Twist’ feels as if it was written in a feverish haste in the waking hours after an absinthe-fuelled nightmare. The story begins in a stagecoach, heading West. But all is quickly revealed to be not that which you would expect. The main character is one Nicola E. Newton, travelling with her parents to that part of the US of A which is now returned to a lawless Wild West Setting due to a ‘psychogeographic event’. The West is now a bridge to the planet Venus, the denizens of whom have been for millenia taking the souls of the dead of Earth.

And in the stagecoach is one such Venusian, the necrobabe, Miss Vera Veneva, accompanying her true love, gunslinger Mr John Twist. Twist by name, and twist by nature, in that Mr Twist’s neck has had the closest of acquaintances with the hagman’s noose, and his near-death experience has brought him together with Miss Veneva, the pair of them waiting, with a palpable sexual anticipation, that time when he does die and they will be truly together.

The story follows this odd trio West, through a run-in with a subterranean Death from another planet, who is selling Weapons of Mass Destruction to the CIA in their battle against the Communist Threat. Having barely escaped the holocaust triggered by them, a final shoot-out takes place, which sees Nicola E. Newton in the condemned prisoner’s cell, awaiting her death with eager anticipation.

A bravura piece of writing. The story-telling is somewhat secondary, and what could have been the big finale is followed by a slightly less dramatic ending with another, final, nemesis appearing stage left. For American readers unfamiliar with Calder, think of a story jointly written by Howard Waldrop, Paul Di Filippo and Lucius Shepard after dropping some acid, and you’ll have a flavour of what Calder furnishes.