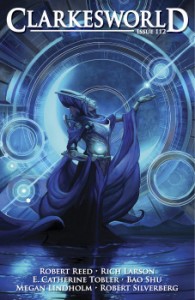 Online here. And collected in Neil Clarke’s ‘The Best Science Fiction of the Year Volume 2‘, from which I read it.

Rich Larson is a new, young author, who has hit the ground running. I have read several of his stories and have been impressed (click on the tag ‘Rich Larson’ above to find my reviews of these stories).

I read this story in Neil Clarke’s ‘The Best Science Fiction of the Year Volume 2‘. It was published in the January issue of Clarkesworld magazine, and I do wonder whether his similarly excellent ‘The Cyborg, the Tinman, the Merchant of Death‘ didn’t get a look-in for inclusion in the Year’s Bests volumes as it came out in Lightspeed Magazine in December, and the ToCs for the Year’s Best tend to be announced in early December of each year.

I said of the ‘The Cyborg..’ story that is was ‘military SF although with a more human bent’, and ‘Extraction Request’ is exactly the same. The story starts in a fairly traditional manner : the small crew of a military vessel crash land into a swamp on an alien planet and all shit breaks loose. What Larson does well is in the characterisation – the crew are all convicted criminals, with brain shunts to keep them from killing each other, and the young, inexperienced non-criminal squad leader has trouble keeping his own shit together, let alone in dealing with the alien shit that they have to face.

He has a couple of means of keeping his shit together, one pharmaceutical, another a colleague who gives him a helping hand, so to speak.

As the crewmembers meet grisly deaths, as with the film The Predator, you expect the young leader to find himself and do an Arnie, but the story goes in an entirely different direction.

Larson has a whole heap of free reads on his website, and I’m guessing a book deal must be imminent.