Rich Horton. Science Fiction The Best of the Year 2008 Edition. 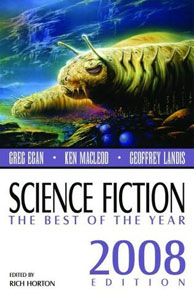 A sequel to the well-received and Dozoised (13th) ‘Luminous’ from Asimovs, Sept 1995. According to my mini-summation of that volume : “Massive computing power is used to probe mathematical certainties. And if 2+2 does not equal 4, then what does that mean for the fabric of the universe? Maths was never this much fun at school”. This follows on, a decade later, as the protagonists, having used maths to poke a hole in the barrier between our universe and one in which the maths is slightly different, takeon the task of monitoring the potentially dangerous rent. And sure enough, another mathematical whizz is dangerously close to discovering it.

There’s a fair bit of complex maths and quantum science, but the story picks up nicely, with a particularly intriguing use of maths to extrapolate exactly what is on the other side, as the threat moves from being an esoteric theoretical possibility to a global scale danger. The individuals are all portrayed effectively, and it avoids being a white labcoated lab-based drama. A top quality science thriller.

Bruce Sterling. A Plain Tale from Our Hills.
Originally in : Subterranean Magazine

Charles Coleman Finlay. An Eye for an Eye.
Originally in : Fantasy & Science Fiction

Another F&SF regular provides a singularly black take on the sf private investigator subgenre. The story starts out promisingly – provided that a guy with an eyeball surgically grafted into his back passage is your kind of humour (hey, it work’s for me). What he has added out back compensates for his lack out front, as he is cojonally challenged : his ex-wife has his balls in her possession (on her mantleshelf in fact), and the PI has to get them back. Unfortunately for the detective, not all is at it seems, or whom they seem, and he gets into some very deep water.

I clearly enjoyed it at the time, but it would have been w-a-y down my list for inclusion in a Year’s Best!

When it appeared I wrote :

Another shorter story, which is a bit of a downer, as with the previous story, as the length enables an idea to be described, but not much more. Here, a commune appears to offer longevity to those who enter its doors. But as you might expect, this shangri-la has its problems.

It did win the Nebula for Best Short Story, and I’ve read it a couple of times, and still don’t see what others clearly see in it.

John Barnes. An Ocean is a Snowflake, Four Billion Miles Away.
Originally in : Baen’s Universe

Collected in Dozois 25th, where I read it and wrote :

Three centuries into being terraformed, the next step in Mars’ re-evolution is to have a large asteroid dropped into an orbit which will see it sublimate its water into the red planet’s atmosphere.

Two rival documentary makers rendevous in the dusty wilderness to capture the moment when the asteroid first impacts on the atmosphere, and in anticipation of this dramatic impact event, there is drama as the two, who have radically different views on the changes being made to Mars, warily debate with each other. A premature impact occurs just as one of the documakers attempts to win the argument by foul means rather than fair, but it is she who needs to be rescued from the dangerous sands.

The story explores the differing views of the opposing characters, who care captured in three dimensions, and it is an interesting character study of both the two humans, and of the planet which is about to enter a new blooming phase.

When it appeared in its magazine publication I wrote :

Scientist fiction, although not the normal scientist fiction, as the scientist is a) female and b) a scientist of color. B) is the crux of the story, for as a child her parents decided to have a virus treatment which turned her white and unkinked her hair in order for her to get on better in society. It’s only a short story, and skin tone and hair type are the only aspects of ethnic identity touched on, as her situation is contrasted with her scientific work against a backdrop of global warming, especially the viral work she does with corn. In such a short space that the story provides it by its nature goes very quickly from set up, through a few quick moral debates, and then straight into the denouement. It’s a very sketchy outline of something that could easily be written at much, much greater length, and a lot of issues are given a very cursory treatment.

When I read it previously I wrote :

A ubik-linked fully-wired gonzo world, in which a young man’s dreamhouse is built in a co-operative fashion by wiki-groups. When things go wrong, the appropriate cause of action is to become the President and instigate a trade war with those with whom they are in dispute. The trade war gets nasty, but their winning hand is to turn off the South American’s sex toys.

A very dark, satirical look at what the world would make of Jesus Christ upon his somewhat belated return. Welcomed by some, shunned by others, claimed as the earthly presence of a visiting alien AI by others, a journalist tries to get to grips with the man behind the legend.

As has been the case of late, Reed’s story is introduced with a reference to a recent ‘real life’ event that prompted the story. In this case a fireworks party, in which one young man looked slightly uncomfortable amongst others of a different background. Here Reed provides a complementary story to Isaac Asimov’s ‘Nightfall’, which follows by means of marking Asimovs Science Fiction’s 30th birthday.

Jack Skillingstead. Everyone Bleeds Through.
Originally in : Realms of Fantasy

A young historian in the space navy finds some unpalatable evidence in searching alien archives. He has been hampered by his mother, a very senior military figure whose very presence invariably brings on a stress-related seizure. He has to get his advice taken on board – if not, the cost will be high.

Not one of the stronger stories in an excellent anthology, and I would have chosen a couple more ahead of this one.

Horton hasn’t chosen many stories from Asimovs for this volume, and this story is a head scratcher, based on my notes when reading it last year:

Short piece set in an arid dry town, about to vote on whether the lack of water should mean the abandonment of their town. And, erm, that’s about it. Phillips handles the description and the atmosphere well, and you can smell the sweat and the dust, but I do like a bit more from my science fiction.

Jablokov wrote some strong short stories in the 80s/90s, being one author who I watched out for in his appearances in Dozois’ Annual Collections. This is a strong story – providing an American counterpart to the Indian rogue AI stories that Ian McDonald has impressed with in the last couple of years (in both short story form and his novel ‘River of Gods’). Jablokov’s story doesn’t have the richness of those stories, and has a touch of American tv cop shows (Jablokov should be pitching this story to some TV companies as a pilot). It features a crew going in to bring to book an AI in a shopping mall that has been exceeding the strict boundaries imposed on these intelligences. However, the extent to which it has been breaking those boundaries is a surprise to the team, who are only licensed to deal with lower level transgressions.

There has been some double-dealing, and the team have to not only deal with the AI, and try to turn the tables on the higher rated AI hunting company who have set them up.

Will McIntosh. Perfect Violet.
Originally in : On Spec

In the ‘Probability Zero’ slot from Analog, which I eschew.

Not so in this case, as Swanwick provides a story out of the top drawer rather than the bottom of the trunk.

It’s a story of depth and richness and resonance that only a really good storyteller, on the top of his form, can provide. An older man reflects, in speaking to his son, of his life. The opening line has a subtle resonance to it (‘Of all the many things that this life has stolen form me, the one which bothers me most is that I cannot remember burying my father’), and it has a solidity to the world it describes. It is set in a slightly different world to ours, but rather than shouting out AH, it does so subtly and tantalisingly, and the way the narrative pops back and forth and unfolds gives added benefit. And notably, to get a poetical lyricism out of the protagonist getting a reacharound from a fellow skysailor, is testament to the quality of the tale.

Conclusion
This volume proved ridiculously difficult to get my hands on (in that, having placed an order on Amazon.co.uk it kept coming back to me telling me that my order had been delayed and would be with me shortly).

As a consequence, I’ve put this review together purely covering those stories I had previously read on their original publication. Fortunately, this accounts for most of the stories, with just a couple of stories from smaller press publications not read.

Horton has covered a range of sources, although those chosen from Asimovs and F&SF don’t match my picks from those sources for the year, and to have two Analog stories and a handful of small press stories is taking up space that could have been better used, and has been the case with others in his take on the year’s best SF there is less I agree with than is the case with the other year’s best volumes.