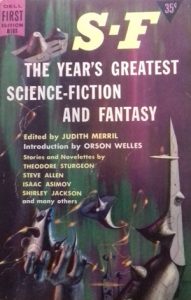 Originally published in Astounding Science Fiction, some sixty years ago, and leads out Judith Merril’s first ‘The Year’s Greatest Science Fiction and Fantasy‘. Definitely SF from a different era, and not really possible to review against today’s standards, and best to avoid the temptation to see how the science projected by the author has stood the test of time.

‘The Stutterer’ has booked a ticket to Earth, the only one of twenty of his kind who manages to escape his planet. We follow his journey, wondering exactly who, or what he is (well, Merril’s intro has already told he us is an android…) His major concern being his huge weight, which he manages to avoid anyone noticing on the flight. He arrives on Earth to carry out a mission on behalf of his people, the last remaining ones (the other 19 are down to 17) telepathically with him.

We follow him on his mission, which fails as his huge weight gives him away to a young boy, who, like everyone on Earth is looking for this menace from space. Also newly arrived on Earth is Jordan, a young man from The Commission, on his first placement, and it is he, and he alone, who has to interview the fugitive/terrorist android to determine his fate. And the story concludes with issues around the nature of the androids, and their humanity.

A nice retro feel to the story, and, interestingly, I read this very close to reading and reviewing Karin Lowachee’s ‘A Good Home’, which has very similar issues around androids created for military purposes, and which was collected in Neil Clarke’s ‘The Best Science Fiction of the Year, Volume 2’.

So, R.R. Merliss makes his first appearance on Best SF (it appears it was the only story he had published), and you can read the story in full, with original illustrations on The Project Gutenberg website.

Interestingly, the German translation of the story was titled ‘Kampfroboter’ (War Robot), and a cover of a German magazine appearance shows the robot in a state in which he doesn’t appear in the story, but uncannily like Arnold Schwarzenneger in ‘The Terminator’!