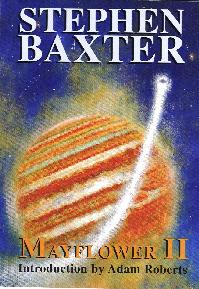 Prolific British SF writer Stephen Baxter has an increasingly impressive body of work to his name, including a variety of singleton novels, and several novel sequences, and a lot of short stories. It is pleasant to see a writer being able to keep such a breadth in their content and format of writing – it seems the trend is to suck successful writers into producing a single interminable series (perhaps more so in fantasy than SF).

In his Xeelee sequence Baxter has produced a substantial clutch of excellent short stories and novels over several years – and long may it continue. I would offer as a counterpoint the fact that a lot of the Xeelee stories are in short story format, which has allowed him to explore vignettes and incidents in a epoch-spanning future history in a way that may not have worked as well if it had been in a number of fat novels.

Baxter’s Xeelee stories go back many years, and some early ones were collected in his ‘Vacuum Diagrams’ collection.

The story sequence features humans set against several very alien races intent on our destruction, humans moving away from their roots (children brought up by the community at large, not knowing parents or parental love), gobsmacking hi-tech deep space warfare, Big Canvas, and in a more recent development, complex characters.

The Xeelee stories have appeared in many locations, including Asimovs and Interzone, and previously as other chapbooks from PS Publishing : ‘Riding the Rock’ and ‘Reality Dust’.

This chapbook keeps up the standard – and how.

It is a slim volume, bit in a bizarre freak of quantum publishing physics the content ‘feels’ much bigger. The plot is a relatively simply one, set in the early days of the story sequence. Earth has overthrown the Qax, and, free from the alien oppression, those on Earth are systematically cleansing the solar system of those who have collaborated with the Qax. The inhabitants of a planetoid on out on the fringes of the solar system, are waiting in dread as Coalition forces head their way : for they have been deemed to be collaborators.

For some of them, there is a chance of escape – five spaceships have been rapidly deployed, and they are to flee : generation starships taking a long, long voyage in the hope of evading annhilation.

We learn this through Rusel, a young man who had not made the final cut for those to get a place on the ark. He is woken in the night to find that the person who had taken the only place on the ship for their specialism has been ruled out due to a genetic defect – there is no place for something like that on a generation starship! Baxter quickly establishes the story and Rusel, who has to leave behind his love to save himself and to keep the colony going.

The tension is hiked up a notch when the time for the starships to depart is suddenly brought forward as the threat from Earth is closer than expected. Rusel has thirty minutes to get on the ship. His determination to survive, and what he has to do to get to the ship are a personal reflection of the bigger picture.

The rest of the story continues apace, as we follow Rusel’s life on the generation starship. In a particularly melancholy sequence, the five starships plunge into Jupiter’s orbit, the better to slingshot them on their way. Rusel is on board the Mayflower, named for historical reasons which few on board recognise. But the Mayflower II has also been picked out of the five for a much, much longer journey – 24,000 light years – outside our galaxy.

We are able to see how the generations, the many generations, cope, as Rusel is one of a chosen few to receive Qax longevity treatment. We see him gradually losing touch with his brother, his nephews and neices, their children, and their children’s children. The millennia pass and humanity evolves (not necessarily in a way which we would want).

Having finished the story, 85 pages of it, you feel as if you have been reading a very long novel. An excellent piece of writing, and tip for Dozois 22nd