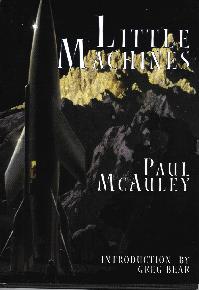 One of PS Publishing’s recent titles is a collection of Paul (J.) McAuley short stories (he normally uses the J, but not in this collection!) and if you are a regular reader of Asimovs, Interzone or Gardner Dozois’ annual collections, you’ll doubtless have come across this accomplished writer at both short story and novel length.

The Two Dicks starts the collection, an Alternate History piece which originally appeared in F&SF in August 2001. The primary conceit is that Philip K Dick achieved fame as a writer of mainstream fiction, and in his role of literary eminence grise it is he, rather than Elvis Presley, who petitions the other Dick, Richard Nixon, to be able to take a part in the battle against the enemies of the USA.

We hear that Elvis’ career did not get off the ground (he now runs a burgeoning donut chain), as neither did that of Bob Dylan. McAuley gets under the skins of PKD, although IMHO truth is stranger than fiction in this case, and I would refer you to an excellent US government archive site which has original handwritten correspondence and transcripts of that most bizarre meeting in the Oval Office.

Residuals was co-written with Kim Newman, and appeared in Asimovs in 1997, and features another alienated character. Ray is living off the celebrity status accorded to him on account of him being one of the couple of guys who made First Contact (a relatively unsatisfying FC as they go). Some years on, he grates over the way the story has been told and mis-told, turned into novels and films, and so forth. When one of his colleagues on that ominous day gets in touch, things start to get very crazy, and the denoument in a very strange maze, which threatens a particulary unpleasant Second Contact, is unsettling.

17 appears in Asimovs in 1998, featuring an eponymous young woman in a very dank and dismal, mostly subterranean near future in which humanity is grubbing in the ruins following an apocaplyptic metoer strike on Earth. She sees a way out making her way to the service, befriending an elderly doctor, who pays a high price for giving her the opportunity to achieve her dream.

All Tomorrow’s Parties appeared in Interzone in 1997, and is, according to the short notes which McAuley provides for each story, a standalone featuring characters from his Confluence novel sequence. Far far future humanity, in which a long lived character uses the 20thC and Papa Hemingway as a lens through which to view the human condition.

Interstitial appeared in Asimovs, July 2000, and when I read it there I said :

The Great Winter has forced humanity from then now-frozen Earth. The moon colonies have degenerated into warring factions, with youngsters groomed into drug-crazed soldiery. McAuley sets off on what is initially a fast-paced army scenario, with a tech forced by his more gung-ho brother into a mission which does not bode well. However, the mission puts him into an altogether different situation, faced with monolothic evidence of past races.

How We Lost The Moon, A True Story by Frank W. Allen was in the Peter Crowther (PS Publishing) edited anthology Moonshots and was collected in Dozois’ 17th. Here McAuley describes how an experiment on the Moon goes badly wrong, as a black hole is created which begins, inexorably, to feed on the Moon itself.

Under Mars was similarly collected in Crowther’s Mars Shots, and features a Barsoomian Theme Park, which is the nearest to the Red Planet many visitors and staff will get. Buzz is one such, but a run in with a gang distributing drugs enables him to finally (in his befuddled mind) transport himself to Barsoom.

Danger: Hard Hack Area was originally published in Nature and is a short piece purporting to report on a ‘biopunk’ conference.

The Madness of Crowds appeared in Asimovs, April 2003, in my review of which I stated : ‘A shorter story in which a scientist experimenting with pheromones finds chemicals which can provoke aggression and pacifity. The story doesn’t go beyond the brother of the scientist retelling the events of previous days, and perhaps the story could have gone further.” According to the author notes which are usefully provided, this story was almost part of his novel ‘White Devils’.

The Secret of My Success appeared in Interzone in 1998, and provides a neat twist on humanity battling the insidious alien menance which is embedded in our society. In his case it is a Class War and not War of the Worlds, as those which his protagnist find have been using science to improve the quality and longevity of their life are simply those who already have wealth and privilege on their side. And in true Marxist style he not only takes up arms, but also legs, torsos, and the various disembodied bits of those against whom he chooses to rail.

An anthology entitled ‘The New English Library of Internet Stories’ was published in 2000 and didn’t make any kind of blip on my radar. McAuley’s contribution was The Proxy which neatly dovetails the Internet and quantum theory, to produce a means by which some very rare goods can be obtained from quantum sources, providing you have the right proxy. eBay was never so much fun.

I Spy appeared in a horror anthology ‘White of the Moon’ in 1999, and is a psychological thriller in which a young boy’s childhood experience of a bullying violent father leads to him developing some very nasty habits as a grown up.

The Rift was in Ellen Datlow’s anthology ‘Vanishing Act’ in 2000, appeared in ‘InfinityPlus Two’ the review of which stated : “Deep in the Amazonian jungle, one of the last unexplored habitats is being finally explored. However, not all is as it seems. The husband/wife/son team who are leading the way down the deep, steeply-sided ravine/rift, know more that they are letting on. There are mysterious things which have until recently been hidden from human view….” The story is a multiple POV, which is a bit awkward as the story is relatively short for this kind of approach.

Alien TV and Before the Flood were both written for the UK annual Novacon (#28 in this case). The former story is set at a con, in which transmissions from an alien race are now generally clicked over by those with the tv remotes, whlist the latter follows in, in looking at some who have taken too much notice of what they have seen on alien TV.

A Very British History appeared in Interzone #157 (alongside stories by Charles Stross and Alastair Reynolds) – in which I reported : “Charming alternate-history non-fiction, in which the British Empire dominates the space race. Some clever touches.”

Crossroads Blues was rewritten for this volume, and is an extended Alternate History riff based around the short life of blues singer Robert Johnson, who died young before the outbreak of WWII. The timing of his death is the key twist in the story, which begins with him having lived and having led a civil rights movement a couple of decades before Martin Luther King, which leads to the USA having a much minor world role than is the case today.

A fine collection of McAuley’s more recent short stories, giving the reader a good feel for his work at a shorter length, with most of the stories being contemporary or contemporary/AH. As such many of the stories have a touch of British reserve and deadpan British humour, which suits me down to the ground. His characters are very realistic, human and flawed, not granite-jawed heroes. Several stories feature those individuals facing changes or threats to that which makes it human, whether the threat comes from alien tv, the have’s opressing the have-nots, domineering fathers, or genmods whose modification have removed their essentially humanity.