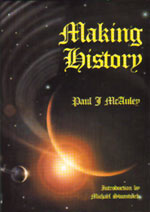 This is a prequel to the author’s ‘Quiet War’ sequence. Previously published stories include ‘Sea Change, with Monsters’ (Asimovs Sept 98, collected in Dozois’ 16th) in which Indira, a macroform hunter (subterranean genmod creatures created during the war) takes on a job on Europa, where a monastery claims that a ‘dragon’ is responsible for damaging their undersea farm. Other stories were ‘Second Skin’ (Asimovs April 1996 and Dozois’ 15th), which featured espionsage on Proteus, and ‘Gardens of Saturn’ (Interzone Nov 98).

The stories are set in the Solar System, which settlements on a number of planets, or more commonly, moons of planets. In this story, the immediate aftermath of a ruthless response to a bid for independence on Dione is the backdrop to a human tale. History is written by the winners, it is said, and we see this in action as the defeated citzens struggle to come to terms with their occupation. An older historian, and a vicious commander of the occupying force both fall into the web spun by a beautiful young woman, and the trio moves towards an inevitable fatal denoument in which intrigue, love and betrayal all play a part.

‘Making History’ is a more thoughtful, human story than others in the sequence, although does suffer slightly as being more of a sequence, and quite possible, the foundation for a novelisation. The ending leaves plenty of scope for future developments.