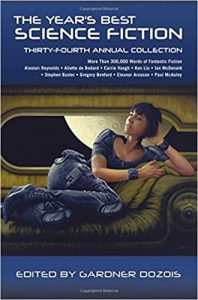 Originally in an post-environmental catastrophe anthology, but I read it in Dozois’ ‘The Year’s Best Science Fiction, Thirty-Fourth Annual Collection’.

Not too much by way of story, but the strength is in the detailed setting and the characterisation of the main character, Mike Torres. He is working in Antarctica, and we find out about himself and the circumstances which put him in that place, and which have had major changes to our environment. The background is handled well, with no info-dumping, and we follow Mike as he takes it on himself to visit the stones dotted around the continent, fabled to be left there by elves.

There are no pointy-eared characters, as the stones simply serve to help Mike mark out his own personal story as he comes to term with his, and the Earth’s past, present and future.

Apologies for the gap in reviews, truth be told, what with brewing and catching up with The Handmaid’s Tale on tellybox (wow) and the original novel (also, wow), I haven’t had much time for reading, and I feared Atwood’s writing would have spoilt me for less masterly writing (it didn’t).