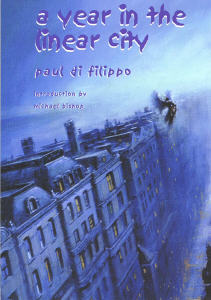 My only complaint about this slim novella is that both the author and publisher have set themselves an almost impossibly high standard against which future outputs will be judged.

The cover of the 80-odd page booklet is laminated, and the cover artwork by Edward Miller is top class, a quantam leap ahead of previous artwork.

The story? Where to start?

The setting is reminiscent of R.A. Lafferty’s ‘The World as Will and Wallpaper’, which was written in 1973, and the comparison with short-story master Lafferty is praise indeed. Lafferty postulated a globe-encircling city, and here Di Filippo describes in just enough detail a truly linear city : a central road with a city block on either side, the back of one block abutting a strange railway track, and the back of the other pressing against a river. The railway and the river are the means of transport, and what lies beyond is known only to the dead. And in this most nightmarish/dreamlike milieu, the sky is inhabited by ‘Pompastics’, creatures which bear away the bodies of the dead. These creatures come in two varieties, the brutish Yardbulls, who threaten an afterlife of torment, and the beautiful gossamer Fisherwives, who promise a more heavenly destination. The nature of the beliefs of the city inhabitants, who are aware that they are inhabiting a city not of their making, is used to gently but wickedly show up our own religious beliefs.

The city itself is somehow built upon a lizard-like living matter, whose scales are precious, although dangerous to harvest. The characters are larger than life, resonantly named, and only slight distortions of a contemporary modern American city. The protagonist, Diego, writes not science fiction, but Cosmogonic Fiction. His paramour is an amazonian firefighter (the author’s writing does suggest a penchant for somewhat domineering beauties). The language is rich, and when visiting another city block, many days travel away, throws up cultural differences delightfully (and fatally).

There is more invention in this short story than I have come across in a long, long time. A shoo-in for the next Year’s Best collections.