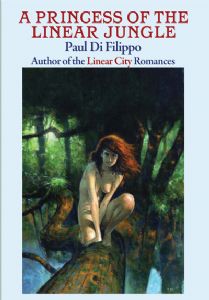 ‘A Year in Linear City’ was published in 2002 by PS Publishing, and I was among many who gave it high marks, noting that ‘There is more invention in this short story than I have come across in a long, long time’. You can read the full review here.

‘A Princess of the Linear Jungle’ came out in 2010, but I never got round to getting hold of a copy. But spotting that it was now selling on the PS Publishing website at only £3.99 (link), pretty much the price of a pint of beer these days, I decided to get a hold of the copy.

It carries on with the inventiveness of the first story, albeit a couple of hundred years after the death of the protagonist of that story, writer of cosmogonic fiction Diego Patchett. However, Patchett lives on throughout the story as references are made to his successful writing career at several points.

The heroine of this story is one Merritt Abraham, a very very feisty young woman, who we find out in the opening chapter is no shrinking violet. She’s leaving home for a job in a museum, unable to finance her education beyond her first degree in polypolisology. And in this journey we are reminded of the chutzpahic Linear City setting – a world that is entirely based on the banks of an enormously (infinitely?) long river, with city block after city block hugging its sides. It’s a world of two suns, a Summer Sun and a Day Sun, and it’s a world close to ours, but deliciously different. The labour of love that has gone into crafting the writing, the characters, the settings, the language and more is plain to see. The story is a tribute-cum-pastiche of ERB, HRHaggard and others.

The opening chapters feature paragraph-long sentences – here’s the first to give a flavour :

“Beating slowly UpRiver at a mere two knots, or eight Blocks per hour, mainly under sails bellying with a warm, maritime-perfumed wind, yet also employing two small supplemental engines, these impellers being the latest invention of Roger Kynard & Progeny, Ingeniators, the Samuel Smallhorne, far from its home Slip of number 42 in the Borough of Stagwitz (Blocks 33,011,576 through 33,011,676), pulled abreast of the Downtown border of the legendary Jungle Blocks of Vayavirunga at approximately ten AM on May the twelfth.”

Now if that doesn’t take your fancy, you’re jaded beyond repair!

Young Merritt has an interesting time on her boat journey, and her time working in the museum, and (ahem) partying, and there’s so much to enjoy on every page, and it needs to be savoured. This leads up to the exploration of the titular jungle and the finding of the Red Princess, which takes us into She territory. Will Merritt be willing to take on the mantle which she is offered? And there’s a tantalising glimpse of what lies beneath the Linear City.

The only problem with the story is that it’s a setting that demands more one novella every 10 years. If JKR can make squillions of pounds churning out hundreds of pages of not very inventive fiction, and PDF can’t make good money out of the Linear City milieu then TANJ.