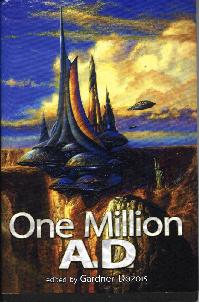 Last month I read and reviewed SFBC’s ‘Best Short Novels 2005’, which saw Jonathan Strahan put together an impressive collection of longer short SF. Here Gardner Dozois has brought together a collection of far future stories which similarly oozes quality, and which will doubtless have many who are eligible to join the Science Fiction Book Club signing on the dottled line. Sadly for those outside of North America, ebay appears to be the best route for getting a hold of copies of these volumes.

Dozois has challenged the authors herein to address the far future – ‘a time so far ahead that the human race and Earth itself will have been altered almost out of recognition, and all our history and culture, everything we are, everything we know and cherish, will have faded to dim and half-forgotten mythology – if it’s remembered at all’.

So how do the authors address this challenging brief? Particularly bearing in mind that the majority of SF, the vast majority of SF, features humans and human society very little changed from where we are now. (In the March 2006 issue of Analog, shortly to be reviewed here, John Barnes features an offworld far future in which hugely long lived humans can travel via matter transportation devices, and for breakfast the main character has coffee, eggs,cheese, fruit salad, bread and OJ. Doh!

First up is the prolific Reed, who has well over 100 short stories listed at ISFdb, and a staggering 88 references on Best SF, and has taken on the mantle, from Robert Silverberg, as the best high-output short SF writer.

He kicks his story off inside the belly of a huge worm, the preferred form of transport for a group of travellers, whose route takes them through places such as Hammer, Mister Low, World’s Edge, and Port of Krauss. The world is a strange one, massive islands and continents of wood, floating across the great oceans, those lands riven with earthquakes and at the mercy of tradewinds.

Young Jopale is one of the travellers, and he is a sole survivor of a catastrophic geyser which poisoned his fellow villagers and flooded the valley in which they live. But this small disaster is overshadowed by a greater menance, as the whole continent is faced with an out of control fire which is consuming the very wood on which they live.

One of his travelling companions, Do-Ane shared a secret with him, and as they flee the world-ravaging fires, we find out more about what passes for history and mythology in this far future Earth, and that the Good Mountain of the title may not indeed by a route off the world, but just a name, a name given meaning by humans.

Robert Silverberg. A Piece of the Great World.

The route to 1,000,000 AD is sketched out immediately from the perspective of an amateur historian who is looking back on the 200 years since his kind emerged from cocoons during a Long Winter brought on by a devastating planetary bombardment. His race are humanity’s gift to the Earth, whose world-circling caravels are long gone, the the only survivors from the Six Peoples of the Great World are the Hjjks, tall insect-people.

An interesting bit of world-creation, but the story doesn’t do it justice. The descendants of humanity are fur-covered, but otherwise human in every respect, and the story itself is a relatively humdrum one of relationships, politics, exploration, and arguments over tickets to the opera (doh!). It may be 1,000,000AD but 200 years after emering from cocoons, there is a cod-fantasy setting with royalty, sea going vessels, broken marriage vows etc. And interestingly, the intro by Dozois to the next story refers to the retro-tinge in much far future SF.

Kress avoids any retro-tinge by immediately pitching us into a story which begins with a human in uploaded state being alterted by an (almost)all-powerful AI to serious charges made against her clone-sister. There is a mystery to be solved, a sister to be found, against a background of politicking around the non-existence of any other intelligent life, this latter also covered recently by Kress in ‘My Mother Dancing’ (Asimovs, June 2004).

The story builds up to a satisfyingling big picture ending.

Reynolds has recently had a particularly good stab at the far future, in his ‘Undertanding Space and Time’, using his expertise as an astronomer/astrophysicists or whatever, to tell a story that looks deep, deep into our past and future.

Here he actually goes beyond the brief, in looking two million years into the future, as a group of dilettante post-humans, all fragments of one ‘descendant’, take part in their regular (every 200,000 year) reunion, at which each provides an upload of what they have done since they last met, to be threaded into the group mind. (Makes sitting through relatives holiday snaps seem a very minor inconvenience).

But there is a mystery (Reynolds has a penchant for mysteries and crime, and we are to be grateful that SF has him, and not crime fiction) as one of the set has falsified his memories.

One couple attempt to unravel the mystery, and I have to own up to having got to the point of checking out how much further the story had to go, as it wasn’t grabbing me. Fortunately, the story sprang to life as the real heavy sf kicked in.

In exploring the ship of the main suspect, they find out that the suspect on the planet is a doppelganger, as the real colleague is trapped in his ship, a plague taking hold of him (as has happened before in his novels!). It transpires that there is a faction who have a Great Work in mind : as light-speed is not attainable, and the galaxy so vast, why not reduce the size of the galaxy by moving the habitable systems closer together?

Such cosmic tampering is seen to have great risks (for species annhilation, which the great distances between planets make unlikely), and there is a dramatic shootout.

Stross revisits territory he had covered with earlier stories, with equal effect. In Stross terms earlier means pre-Big Time (pre-Accelerando) and covers a good fifteen years or so of sporadic short SF, and the stories in question are from the later part of this period – ‘Antibodies’ (Interzone, July 2000) which memorably has alien intelligences monitoring humanity in human form baling out when things go, yet again, pear-shaped; and his ‘A Colder War’ (Spectrum SF #3, August 2000) which has an alternate history/Cthulhu mix which very memorably sees humanity freezing its sorry self far from home. Both stories appeared in Dozois 18th, and the subsequent Accelerando stories in Asimovs brought Stross to the attention of the SF community.

Stross, to some extent, cheats on the One Million A.D. concept, in providing a 1970s alternate history setting. But he does this with chutzpah as it is posited against timescales measured in galactic spins. There’s a touch of the Stephen Baxters in it, with regard to having Yuri Gagarin in a different history to the one we know, and a touch of the Alastair Reynolds, in the use of a conceit in which the Earth is replicated by vastly superior intelligences in a far off setting (Reynolds’ ‘Century Rain’).

Stross has his 1970s Earth one in which the Cold War is very much alive, taking place on an Earth whose surface has been skinned and planted on a colossal flat disk outside of our own Milky Way. Indeed, humanity can see the major changes which have been wrought on our galaxy in the million years it has evidently taken to transport us to the new location (albeit it being instantaneous as far as we are concerned). Sod Pratchett’s elephant-mounted turtle, this is a hard SF disk with the science in place to support it.

There are memorable scenes, as the USA heads westwards into uncharted territory (for the USSR is to its East and the two do not join up any more), and Gagarin leads a Russian vessel far into the disk. It is the latter who has the Chuck Heston ‘damn you all to hell’ revelation.

The true nature of the disk is revealed, and the true challenge to humanity’s existence is gruesomely shown as hive-mind creepy-crawlies are the inheritors of this planet. And in echoes of what has previously happened on the disk, the bombers drone is the backdrop to the end of this world, as the chittering horrors hiding in human skin ponder their ascendance.

A couple who have been married some 10,000 years are feeling somewhat jaded and ponder whether it isn’t time to call an end to it all. But instead of choosing a joint suicide, they decide to concentrate on one of the great mysteries, who (or what) is on the other side of a barrier in the galactic centre : humanity’s attempts to approach have been continually rebuffed by someone, or something.

The couple knuckle down to the task, travelling vast distances, uploading and downloading into freshly minted bodies, and drawing on help from the various intelligences en route, including, memorably, a snakelike hivemind. In the end it is Leila who is the most committed, and in making the transition through the previously impermeable barrier, gets a tantalising glimpse of what lies beyond, one which she does not share.

I have to admit to a bit of a feeling of let-down. With a lineup of Reed/Silverberg/Kress/ Reynolds/Stross/Egan, and with Gardner Dozois at the helm, and with a central One Million AD conceit, I was expecting something absolutely mind-boggling, but didn’t in the end get quite as much boggle for my buck as I had hoped.

Yes, there was boggle in pretty much all the stories to varying extents, but I’d approached the book benchmarking it against HG Wells ‘The Time Machine’ for far future boggle, and I don’t think any of the stories boldly went where no-one has gone before. The stories could be read with next to no editing as part of a 100,000 AD or 10,000 AD or even 3,000 AD collection, so rather do miss the whole point of the collection.

But that said, there’s a lot of boggle in there, with most of the authors showcasing their talents (Silverberg and Egan less so), and getting beyond a lot of other short SF, and kudos to Andrew C Wheeler at SFBC for commissioning new short SF. So I’d recommend SFBC, eBay, or the likes of Alibris for your next port of call.