31st August 2021. Ken Liu’s ‘Thoughts and Prayers’ in Strahan’s ‘The Year’s Best Science Fiction Volume 1’ is a depressing read, looking at the aftermath of a mass shooting, made worse by the mother’s decision to use her dead daughter’s image in a campaign against shuch events. Fortunately, the following story in the volume, Vandana Singh’s ‘Reunion’ is much more upbeat, and has lots to like about it.

30th August 2021. Elizabeth Bear’s ‘Soft Edges’ in Strahan’s ‘The Year’s Best Science Fiction Volume 1’ was just a little too reliant on lengthy debate of a moral dilemma to work as a story for me, although it had some nice touches. MAGA-hat wearers will probably have their head explode if they read it.

29th August 2021. Just read Peter Watts’ ‘Cyclopterus’ and Suyi Davies Okungbowa’s ‘Dune Song’ in Jonathan Strahan’s ‘The Year’s Best Science Fiction, Volume 1’. Both near-future eco-catastrophe stories, it would have been better to have separated them in the volume.

17th August 2021. Just read S.I. Huang’s ‘As the Last I May Know’ in Jonathan Strahan’s ‘The Year’s Best Science Fiction Volume 1’. It won the 2020 Hugo Award for Best Short Story FWIW, but for me it was a bit retro and simplistic for my liking. Next up in the volume is Fran Wilde’s multiply-nominated ‘A Catalog of Storms’, which is bang in the middle of Weird Unexplained Shit Going On territory, and as fantasy is somewhat out of place in a SF anthology.

12th August 2021. Just read Rich Larson’s ‘Contagion’s Eve at the House Noctambulous’ in Jonathan Strahan’s ‘The Year’s Best Science Fiction Volume 1’, and by golly it’s a good one. I haven’t put the story illustration to the left for, well, reasons.

10th August 2021 – just read, in Jonathan Strahan’s ‘The Year’s Best Science Fiction Vol. 1’ Karin Tidbeck’s ‘The Last Voyage of Skidbladnir‘, which I rather enjoyed. You can read it over on Tor.com and props to Victor Mosquera for the illustration. However, the following story in the volume, Malka Older’s ‘Sturdy Lanterns and Ladders‘ is Earth and ocean-based and didn’t do much for me. And even worserer, a real oh bugger! moment, it transpires that next up in the volume, Ted Chiang’s ‘It’s 2059 and the Rich Kids are Still Winning‘ is not only just three pages long, it’s also just an op-ed (albeit one from the future) covering well established issues around their being more to achievement than IQ and education, rather than it being a story. #disappointment

9th August 2021 – Rich Larson’s ‘Painless’ and A.T. Greenblatt’s ‘Give the Family My Love’ close out Neil Clarke’s ‘Best Science Fiction of the Year #5 strongly. Bring on #6. And muchly enjoyed the Men In Black/Fifth Element vibe of Tobias S. Buckell’s ‘The Galactic Tourist Industrial Complex’ in Jonathan Strahan’s ‘The Year’s Best Science Fiction Vol. 1’. But Saleem Haddad’s ‘Song of the Birds’ has an altogether darker tone.

5th August 2021 – five stories read in Neil Clarke’s ‘Best Science Fiction of the Year #5, just two left, which is good timing as #6 won’t be too long before it lands on my doormat.

25th July 2021 : bit of a break from reading, but Charlie Jane Anders’ The Bookstore at the End of America was a doozy of a story to mark my return.

21st May 2021 : over the past week I’ve read Ann Leckie’s ‘The Justified’, Annalee Newitz’ ‘Old Media’, Alec Nevala-Lee’s ‘At the Fall’ and Ray Nayler’s ‘The Ocean Between the Leaves’ in Neil Clarke’s ‘The Best Science Fiction of the Year Volume 5’.

21st April 2021 : big development here folks, the Nebula Awards Showcase 54 volume has, I realise, such large print that I can read the book with my Laptop Glasses, of which I have several pairs, meaning that I don’t have to play the game Where Are My Fcking Reading Glasses!, which involves stomping round the house. Sometimes that game evolves into Seriously, Where Are My Fcking Reading Glasses!, which goes off into tangents including No, Those Are My Reading Small Print Glasses! or No, Those Are William’s Glasses!! Anyhoo, I duly read, in quick order, A.T. Goodblatt’s ‘And Yet’ a haunted house/revisiting the childhood horrors story which felt just a little too like previous stories in a similar vein. But as a librarian, my fancy was truly tickled by Alix E. Harrow’s ‘A Witch’s Guide to Escape : a Practical Compendium of Portal Fantasies’ and I have passed the story over to my ex-children’s librarian wife for her to read it.

7th April 2021 : busy of late walking the streets enumerating, in a job the kind of which only comes along every ten years or so. I just read Karen Osborne’s ‘Cratered in Neil Clarke’s ‘The Best Science Fiction of the Year Volume 5’, but which didn’t quite do it for me.

The new slimmed down presentation of Best SF reflects a reduction to reviewing just the Year’s Best volumes. To see what I was up to in the 20 years before that, check out BestSF.net on The WayBack Machine 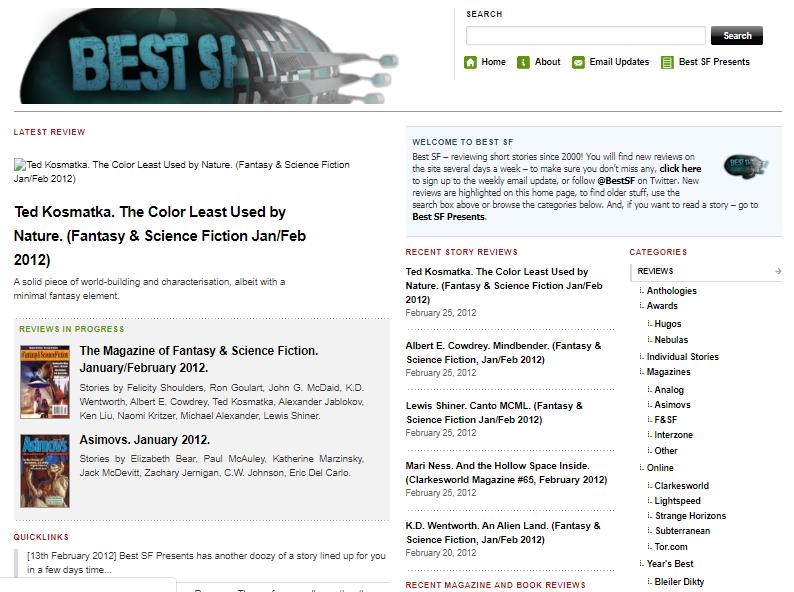