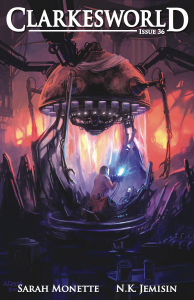 I’m a glass half full kind of guy (except when I’m in a mood and am of the opinion that the bottom half of the glass is full, and the top half is empty), so when stationary on a motorway on the l-o-n-g drive to the office which I undertake/endure a couple of times a week, twizzling through the iPod which is plugged into the i30, I happened upon this Clarkesworld podcast and passed the low gear crawl listening to a story that was one of two from Clarkesworld (the other being Kij Johnson’s ‘Spar’) recently nominated for a Nebula.

Before you go any further, it would make sense for you to read it here here, or listen to it
here.

It’s a neat urban fantasy, in which the laws of chance are suddenly tilted very much in favour of events, both good and bad, happening. The story revolves around one woman’s reactions to this new world (confined just to New York), and the reaction of society as a whole. It’s an interesting conceit – for the pace of change we face is generally sufficiently slow that things change incrementally, and society as a whole can generally adjust over a generation or so. In Jemisin’s story that change is instant and has to be embraced, endured, or avoided (by leaving the city), and we follow a few days in the life of the protagonist, suddenly a stranger in a strange land, whose initial response it to arm herself with charms and to avoid anything remotely risky, but who finds an accommodation with the changes. It’s a neat story from an author new to me.