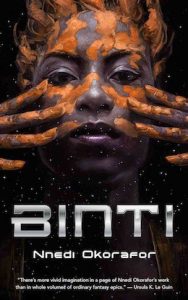 I read this in Nebula Awards Showcase 2017, rather than it’s original online publication on the Tor website. I’m not sure if it was available in full initially, but there’s just an excerpt there now.

I have to admit to be being rather underwhelmed by the story. It starts off well, the first few pages describing Binti leaving her family, her community, her tribe, behind to take up a place at an off world university are fine enough, with some good world-building.

Having said that, it wouldn’t take too much work to rewrite this part of the story to any historical period, describing a young woman from a rural tribe taking her first tentative steps into the big, wide world.

And then out of nowhere : ‘Then someone screamed and Heru’s chest burst open, spattering me with his warm blood. There was a Meduse right behind him…’

At least Okorafor doesn’t start that sentence with ‘Suddenly’, which would make that a *very* clumsy bit of writing. (Mind you, I have seen reference to this being a Young Adult story, so maybe that kind of writing is acceptable in YA fiction??)

And I’m fairly certain there wasn’t any mention of ‘Meduse’ prior to that sentence, which is not a good thing.

Anyhoo, the story then revolves around Binti finding a way to stay alive with the Meduse on her spaceship. Fortunately, she has an ‘edan’, which is like… well, it’s like Dr. Who’s magic wand (sorry, sonic screwdriver) .. in that it’s a bit of kit that is enormously helpful in dealing with the situation.

And the story continues in a YA (or Analog-y) style as Binti begins to communicate with the Meduse, and all comes out well in the end.

So, maybe I’m reading a story for children and I’m almost half a century past the time I was reading children’s stories, and not giving it a fair deal, but a Nebula *and* a Hugo Winner as the *best* short SF story in 2015 at longer length???