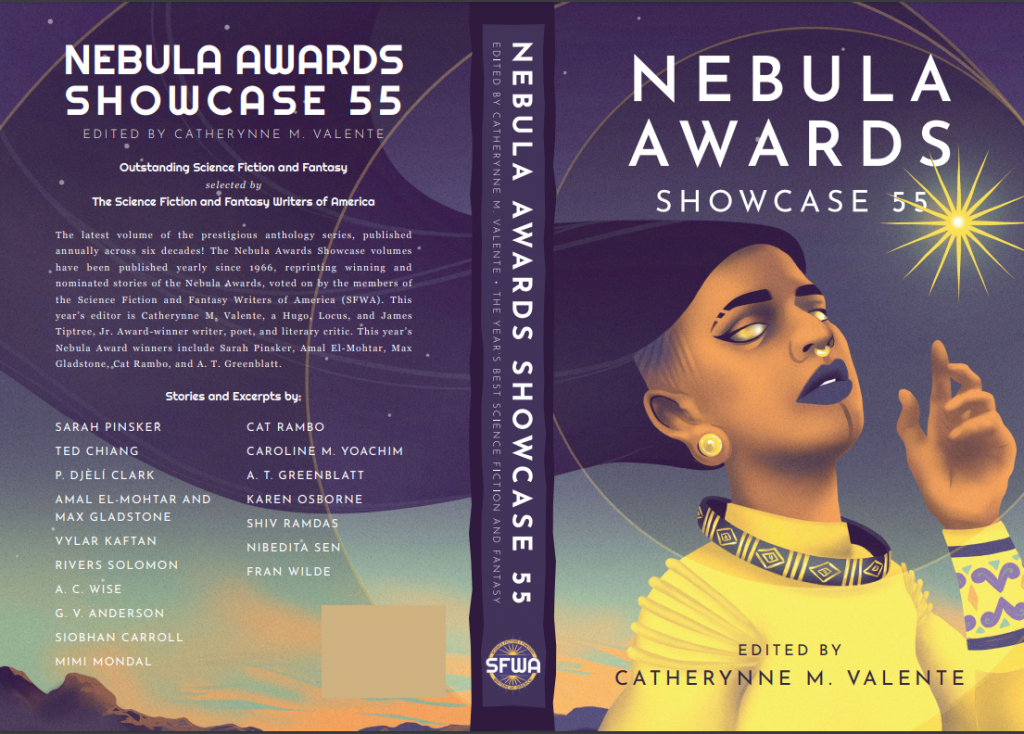 A handsome book, my copy printed over here in the UK by Amazon. I’d like to think my online order triggered a single print-run just for me, but I’m guessing probably not.

I’ve put the contents of the volume in below. I have already read a couple of the stories in their appearance in one of the two Year’s Best volumes, and have linked to my reviews of those stories. That pretty much tends to mean that my interest in the other stories will be limited, as not having been selected in a Year’s Best SF volume will mean that either they’re not very good SF, or, as is mostly the case with these volumes of late, they will be fantasy, horror, or speculative fiction.

The volume starts with some editorial. Catherynne M. Valente’s introduction is followed by Seth Dickinson on the subject of game writing, Foz Meadows looks at ‘Queering Chaos’, and LaShawn Wanak ponders ‘Lois McMaster Bujold and Being a Grand Master’.

A.T. Greenblatt’s ‘Give the Family My Love’ appeared in Clarkesworld Magazine, and it is still online. I read it in The Best Science Fiction of the Year, Volume 5 (ed Neil Clarke, Nightshade Books 2020) and enjoyed it. You can read my review of the story in that volume. It was also collected by Rich Horton in his take on the year’s best SF&F, and it won the Best Short Story Nebula Award (you have to spot this bit of information in the content listing, as it’s the *only* place in this volume where the Nebula Award winners for the year are referenced. Yes, seriously.)

Karen Osborne’s ‘The Dead, In Their Uncontrollable Power’ appeared originally in Uncanny Magazine and is online here. I started it a couple of times but got irritated by it’s style, so will link you to this review by Lela E. Buis which shares some of my issues with it.

Shiv Ramdas’ ‘And Now His Lordship is Laughing’ was originally published in Strange Horizons and is online here. It’s evidently post-colonial speculative/alternative fiction

Nibedita Sen’s ‘Ten Excerpts from an Annotated Bibliography on the Cannibal Women of Ratnabar Island’ was publshed in Nightmare Magazine, and is still online and, I’m pleased to say as a qualified and once Chartered Librarian who studied at the feet of Dewey, Bliss and Ranganathan (not literally you understand) that this does indeed consist of annotated bibliographic entries.

Fran Wilde’s ‘A Catalog of Storms’ appeared in Uncanny Magazine, was a Hugo, Nebula and Locus finalist. I read it and enjoyed it in The Year’s Best Science Fiction, Vol. 1 (ed Jonathan Strahan, Saga Press 2020) although I noted that I wasn’t sure what it was doing in a SF volume, as it is firmly in what I call WUSGOtm(Weird Unexplained Shit Going On) territory, rather than SF. It’s online here.

A.C. Wise’s ‘How the Trick is Done’ also appeared in Uncanny Magazine and is online here. A story featuring magic.

Siobhan Carroll’s ‘For He Can Creep’ was published onlne by Tor.com and is online here and is “A dark fantasy about Jeoffry, a cat who fights demons, a poet, who is Jeoffry’s human confined to an insane asylum, and Satan, who schemes to end the world”. So not SF.

Mimi Mondal’s ‘His Footsteps Through Darkness and Light’ was published online by Tor.com and is still online. A story featuring an Indian trapeze artist and a djinn.

Sarah Pinsker’s ‘The Blur in the Corner of Your Eye’ is yet another story which also appeared in Uncanny Magazine, and is online here. A horror story.

Caroline M. Yoachim’s ‘The Archronology of Love’ appeared in Lightspeed Magazine. It was chosen by Jonathan Strahan in his take on the Year’s Best SF, where I read it, and you can read my review of the story here although I felt “..it was just missing a little something to be a classic..” The story is online here.

So, as is the case nowadays, not a whole lot of SF in this volume into which to get my teeth, and so onto the shelf it goes, alongside the other 54 volumes in the series! Although as I’m downsizing my collection, I’m thinking that this might be the last volume I buy, and will simply put the contents up of future volumes. Heigh ho, I’ve got old and the world has moved on. If indeed dead tree versions of book are still being produced in this bright new future into which we area headed.