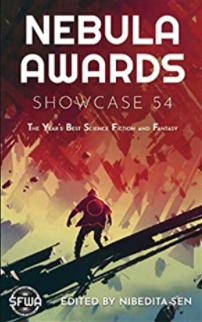 The annual Nebula anthology had four different publishers in the last five years, and this volume is published by SFWA themselves. I bought it on amazon.co.uk and it came to me with Printed in Great Britain by Amazon on the last page, so presumably a Print on Demand publication (I’m a bit out of touch with publishing these days, it’s probably a Locally Produced Fungible Resource rather than PoD.)

Before the stories start, Editor Sen provides a very brief introduction, musing on the problems of producing fiction in strange times. Kate Dollarhyde provides a brief review of computer game writers and their acceptance into the realms of the more traditional writing community. And Brandon O’Brien briefly ponders ‘Spider-Man: Into the Spiderverse’ and the role of fandom.

First up, fiction-wise, is Phenderson Djèlí Clark’s ‘The Secret Lives of the Nine Negro Teeth of George Washington’, originally published in Fireside Fiction, February 2019 and still online there. I enjoyed the story/stories when reading it in Jonathan Strahan’s take on the best of the year’s SF&F. I noted also an interesting article about the story. It won the Nebula Award for Best Short Story.

Second up is Rhett C. Bruno’s ‘Interview for the End of the World’. It is subtitled ‘A Short Story set in the Children of Titan’ series, which prompted me to do a quick google, and clearly there’s a market for his work, and he’s clearly happy to supply that market. I managed a couple of pages, but found it lacking in pretty much anything I look for in a short story, and for my money this story is out of place in this series of anthologies. [15-Mar-2021]

A.T. Goodblatt’s ‘And Yet’ is a haunted house horror story, with an sfnal element in that the adult revisiting her childhood’s neighbourhood’s haunted house, and the haunting memories of her youth, is now a scientist researching parallel universes. It felt just a little too like previous stories in a similar vein. [21-Apr-2021]

Alix E. Harrow’s ‘A Witch’s Guide to Escape : a Practical Compendium of Portal Fantasies’ was collected by Horton and Strahan for the 2019 take on the Year’s Best SF&F. In the latter, reading just the SF I did make a comment in the review of those books ‘Note to self : come back to read this’. Well, I didn’t go back to it in that volume, but I did read it in this volume and indeedly enjoyed it hugely. Being a librarian (of the warlock variety, the librarian in the story being of the witch variety), and married to a librarian, who like the librarian in the story, was also a children’s librarian (in the halcyon pre-‘austerity’ days, when local councils in the UK employed professional librarians in such roles), meant that the story resonated for me, and it’s so beautifully written. [21-Apr-2021]

Fantasy in which a young boy becomes the Court Magician, but finds that real magic has a real price. I did read it all, but couldn’t really see how the story was anything out of the ordinary. [2-June-2021]

Winner in the Best Novelette Category. I didn’t recognise the American references to spot this as a form of Alternate History, or fully appreciate what was hapening, and found it a tad confusing due to the non-chronological structure, and also found the conceit of intelligent, but luminous elephants a tad difficult to engage with. One to come back to at a later date, perhaps. [2-June-2021]

I’ll return to this one.

Jose Pablo Iriarte. The Substance of My Lives, the Accidents of Our Births.
Originally in Lightspeed Magazine #92 January 2018, and still online.

Non-binary teen, with the usual teen problems in stories like this (bullies, trailer park home, single mom) has some memories of their previous lives (no explanation of the hows or whys) and in between dodging bullies (or not) they meet up with someone from their past and there’s a murder mystery to be solved (not that it’s much of a mystery or one that takes a lot of effort to resolve). The story is, for me, a l-o-n-g way short of Nebula nomination standard. [02-Jun-2021]

First Contact Story, in which a US-based scientist heads sharpish to his family home in remote India to meet up with the alien who has landed there. The alien is very open about his plans, and is happy to share a lot of his technology, to the extent that he leaves the protagonist with the skillset to thwart the very reason for his arrival on Earth. It’s a well-intentioned story, adressing humanity and capitalism’s rapacious approach to the Earth, and beyond. But, by golly, there’s an awful lot of conversation betwixt the two, and interior monologue (yah boo sucks to Show Don’t Tell). I *did* agree with the writer that the less said about the jerkoff scene the better. But as with the previous story, this just feels like a pretty average US TV drama script turned into a story, rather than one of the best science fiction stories of the year. [02-Jun-2021]

Well, what to say about this story? It’s written by two Sri Lankan authors. The story appeared in an anthology published by LMBPN, who appear to publish a certain kind of story by a certain kind of author. The story is military SF, which tends to do nothing for me. And it’s basically a take on the movie ‘Pacific Rim’, with massive aliens attacking Earth, which is being defended by humongous human-controlled robots. I didn’t get far into it before skimming to the end. [24-July-2021]

And the short stories finish at this point, the volume concluding with seven extracts from books (five from tor.com), and self-penned author bios.

Frustratingly, the book does not actually give details of the nominees/winners in each Nebula category, which is rather a glaring omission. How much effort does it take to set up a page with this crucial information on it??

And of the eleven stories, there are only two I would accept as being of a standard to justify inclusion in a Nebula Awards volume. Excluding those two stories, you could say ‘Alexa, choose 11 SF or fantasy stories for me’ and you would be in with a reasonable chance of having just as good a volume as the one in hand. As someone who has read, and has got a copy of every issue of the Nebula Awards series, it’s an increasingly sad fall from grace.

And that’s all I have to say about that.