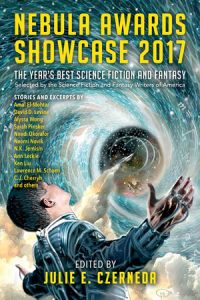 Another year, another Nebula Awards Showcase. This 2017 titled and published volume contains stories mostly published in 2015, so you need to match this volume with the 2016 published Year’s Best anthologies if you want a full coverage of different takes on the best in SFF for the year in question.

I’ll build up this review as I go along, pulling in some reviews of stories it contains which I’ve previously read, and those which I read as I go through the volume. So here goes…

Naomi Kritzer. Cat Pictures Please. First published in Clarkesworld Magazine, January 2015, and still online. I read this story two years ago and noted the AI protagonist had “.. researched ethics and morals, including the SF canon, referenced Asimov and Sterling, and all in all it’s a great read.”. Full Best SF review here.

I read it on it’s original appearance, and was so impressed I put it forward for the 2015 edition of the short-lived Best SF Short Story Award. As with the previous story, an AI mind is the protagonist and I noted “..the character of the ship mind comes across well, and the moral dilemmas it/she faces, and the denouement is a pleasing one.” Full Best SF review here.

One of several strong stories from Miller, and as with the Levine story above, I put this forward for the Best SF Short Story Award. Full Best SF Review here.

Martin L. Shoemaker. Today I am Paul. First published in Clarkesworld Magazine #107, August 2015 and still online. It’s ‘a touching story, looking at ageing and Alzheimers, through the lens (or should I say the robotic eye) of Medical Care Android BRKCX/01932-217H-98662’. Full Best SF Review here.

Sarah Pinsker. Our Lady of the Open Road. Originally in Asimovs June 2015, where I read it and I noted subsequently about it’s Nebula nomination : ‘a nomination with which I can’t agree. The Pinsker story is fine enough, but next to no SF in it, and I’d have put two other stories in this issue ahead of this story, let alone from the rest of my 2015 reading’. Full Best SF review here. And since those words about it’s nomination, it won the Nebula Award Best Novella.

And that’s it for the short SFF this volume as there are excerpts from the 5 nominees and 1 winner of the Best Novel Award, ‘poem’ that is a list of 100 bulleted points, and a heap of other stuff that failed to grab the attention of this short SF focussed reader. So no space for nominees in the Novella and Novelette categories – although the four of the nine of these stories that I have read two were stories I remember as being not particularly taken with, and two I actively had issue with.

So, as a record of the best short SF in 2015, this volume manages to do a reasonable job but Gardner Dozois’ Years Best Science Fiction 33rd Annual Collection gives a far better representation of the best in short SF for the year.