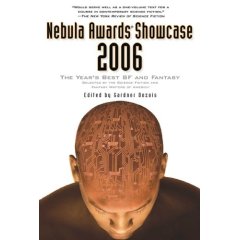 Gardner Dozois, freed from editing Asimovs, takes his turn at editing the annual Nebula volume, and doubtless had a sense of nostalgia in so doing, as one of the stories in the volume will have been given the nod by him for Asimovs as far back as 2002!

As with previous years, after a short introduction and listing of the awards, the fiction gets underway, with the relatively lengthy author introductions which tend to relate to the writing of the story, giving added value to the volume.

First up is Walter Jon Williams’ ‘The Green Leopard Plague’, which first appeared in Asimovs Oct/Nov 2003, which won the Best Novella category (ahead of Catherine Asaro’s ‘Walk in Silence’, Adam-Troy Castro’s ‘The Tangled Strings of the Marionettes’, Vernor Vinge’s ‘The Cookie Monster’, and Connie Willis’ ‘Just Like The Ones We Used To Know’.

On its initial magazine appearance I wrote:

A very skilfully crafted short story. Set in the same future as his well-received ‘Lethe’, this is of an equally high standard. Williams intertwines two, or in fact three stories, tying them together in a powerful ending. We start in the warm waters of the Philippine sea – literally so, as Michelle is a mermaid, and we follow her on a fishing trip. She is not quite a mermaid – but a human currently occupying a genmod body. She is given a job by an aged scientist by the name of Davout – the job: to research a gap in the life of Jonathan Terzian, a scientist whose Cornucopia Theory literally changed the world.

The stories gradually unfold, with Terzian’s bravery offering the world a chance to redeem itself. Where a less impressive story would end here, Williams then ups the ante by showing, via Michelle, that the scientific breakthrough for which many died was in fact not a success – almost the opposite. And Michelle’s lover, who has been trying to find her since his last death (people can upload their memories to ensure that any fatal accidents are easily recovered from) finds that there is something she knows about him that she is not about to forgive. Excellent.

Next up is Ellen Klages’ ‘Basement Magic’, which appeared in The Magazine of Fantasy & Science Fiction, May 2003, which was winner in the Best Novelette category, ahead of Andy Duncan’s ‘Zora and the Zombie’, Christopher Rowe’s ‘The Voluntary State’, William Sander’s ‘Dry Bones’, and Lois Tilton’s ‘The Gladiator’s War: a Dialogue’.

A tale of a young child with a wicked (well, not very nice) step-mother. Somewhat redolent of Roald Dahl – a melange of George’s Marvellous Medicine, and The Witches, with the young girl using good ol’ fashioned simple magic, with the help of the latest in a long line of nannies. Even with the step-mother taught a lesson, Mary Louise decides that a rodentary future with the nanny, Ruby, is her best option.

Up to F&SF’s usual high literary standards, but even accounting for it not being Science Fiction, even as fantasy/speculative it was just lacking that little something extra for me – such s the very creative world in Christopher Rowe’s runner-up ‘The Voluntary State’ (see below).

One of the runners-up to Klages, William Sanders’ ‘Dry Bones’ follows. It originally appeared in Asimovs in May 2003, and upon reading it then I summarised the story:

A hot summer in the 50s, and a young boy’s summer is highlighted by an archaeological dig in the nearby desert. However, the bones which are find are anomolous. The ancient bones are wrapped in fragments of futuristic clothing. However, the find is buried in the desert, covered up, as is the infidelity between the boy’s teacher and one of the archaeologists.

I can recall the story being a good read, one of a ‘strong collection of stories’ from the issue, although not one that I would have said stood out head and shoulders above the ten issues of Asimovs from the year in question.

The fiction is broken up by a series of views from SF writers in ‘The Masters Speak’, which, as the title suggests, throws open the soapbox to some very distinguished names (Jack Williamson, Robert Silverberg, Ursula K Le Guin, Brian W Aldiss, Frederik Pohl)

The fiction resumes with Christopher Rowe’s ‘The Voluntary State’ which originally appeared in the already-much-missed SCI FICTION. I didn’t actually read it online, but caught up with it in Haber/Strahan’s ‘Science Fiction The Best of 2004’ and wrote

As mentioned, a runner-up to Klages’ Basement Magic, but for me properly sfnal : I tend to take the view that if a story is such that my wife wouldn’t enjoy it, then it’s SF, and I know that she wouldn’t have time for the Rowe story, but would enjoy Klages ‘offering!

Jody Lynne Nye provides an appreciation of Anne Mccaffrey, on whom Grand Master status was bestowed, and the volume includes ‘The Ship Who Sang’ which for me is one of the classic SF stories of all time.

Eileen Gunn’s ‘Coming to Terms’ was originally in her ‘Stable Strategies and Others’, and won the Best Short Story category ahead of Mike Moscoe’s ‘The Strange Redemption of Sister Mary Anne’, Mike Resnick’s ‘Travels With My Cats’, Benjamin Rosenbaum’s ‘Embracing the New’, Greg van Eekhout’s ‘In the Late December’, and Ken Wharton’s ‘Aloha’.

It’s a short, sad tale of a daughter sorting out her late father’s estate – said estate being a cluttered flat with most items having little notelets written by him about the item in question and its provenance. A gentle story, with a minimal fantastical element, and as above, a bit too mainstream for my sfnal tastes. Gunn’s comments relate to the fact that helping Avram Davidson’s son pack his recently deceased father’s belongings contributed to the story, although the story is not about Davidson.

Relatively new author Benjamin Rosenbaum’s ‘Embracing-The-New’ appeared in Asimovs, January 2004, and upon reading it there I wrote:

New writer Rosenbaum has hit the ground running, and this story is an excellent addition to his growing collection of stories. He succeeds in a short piece in building an imaginatively different society and in telling a story – not something that is that easy to do. Young Vru attends aged master godcarver Khancriterquee, who is concerned that his ailing flesh will necessitate him passing on his memories. Such a passing on of skills is done through a symbiotic biological transfer – Ghennungs are small creatures which contain memories of forebears, and the rich will have several creatures on their body, and consequently benefit from the wisdom of their predecessors. Vru is singled out for the honour of becoming the next godcarver, and duly creates a wonderful new God. But his radical concept does not fit with the cunning Khancriterquee, who wishes to ensure that his own skills and knowledge will dominate those of the person who takes on his Ghennungs. Vru pays the ultimate price, having his Ghennungs removed and thus become little more than an animal.

An extract from Lois McMaster Bujold’s ‘Paladin of Souls’ is provided, due to its winning Best Novel, and is followed by Andy Duncan’s ‘Zora and the Zombie’ was a SCI FICTION story, and runner-up to Klages’ ‘Basement Magic’

. Zora Neale Hurston was a black American writer/anthropologist from the first half of the 21st C, and here Duncan provides a fictional take on her time in Haiti and her study of zombie magic and mythology. An atmospheric story, although not SF nor SF&F nor really speculiative…

Kathi Maio looks at the film year in review, after which we have Mike Resnick’s ‘Travels With My Cats’ first appeared in Asimovs, Feb 2004, and was a runner-up to Eileen Gunn’s story in the short story category. When it first appeared I wrote :

Resnick furnishes a story the like of which you would normally expect to see in F&SF, or in other more mainstream sources. A young boy’s finds a limited edition travel book written some time back by a Miss Priscilla Wallace, whose prose descriptions of her travels enraptures the boy. Some decades later, a rather lonely middle-aged man, he is drawn to dig out this old treasure, and is once again transported. Not only is he transported, but the author, whom he has been researching, is transported to him. Having found something special in his life, it is cruelly snatched away when his copy of the book is destroyed, resulting in his setting out on the road to find another copy of the book in order to be reunited with Miss Priscilla Wallace. A gentle, charming story.

Some Rhysling Award Winning pomes are provided for those so inclined, although for the life of me I can’t see how Theodora Goss’ work is anything but prose.

Vernor Vinge’s ‘The Cookie Monster’ first appeared in Analog, October 2003, and was a runner up to the Williams story in the novella category. When it appeared I was underwhelmed :

Dixie Mae is pleased with her new job with a hi-tech company. However, a strange e-mail jolts her out of this situation. Something very strange is going on. Very strange. Dixie Mae and her colleagues set out to solve the mystery. It transpires that Dixie Mae is in fact an upload, and she and her colleagues are being run in a computer simulation. Time and time again. Vinge posits massive hardware and very clever software, and has an interesting idea, but the story comes across as being just a tad pedestrian – not least in that most of the action is in the form of the characters walking between office buildings!

There’s a palpable lack of emotion as the characters find out that they are just uploads, and in one case a character come face to face with another instance of themselves, but takes it in her stride. Hark back to ‘For I Have No Mouth and I Must Scream..’ for a group of people memorably uploaded into a computer and the human reaction to that circumstance – written some 40 years ago?

And there’s an awful lot of dialogue and tech discussion between the characters, which tends to get in the way of a story developing, and the ending is somewhat anti-climactic – the characters have worked out pretty much what is happening, but resolving it is the challenge on which the story ends.

But having said that, I did finish the story thinking I was holding a copy of Asimovs in my hand, which puts the story some way ahead of the average Analog story.

For details of the winners/nominees I would refer you to LocusMag Index to Awards for the Nebula Awards, and the Hugo Awards 2004 and 2005 for the matching years. As with recent issues, a handsome book to mark the Nebulas, although the stories themselves aren’t going to echo down the SF Hall of Fame in generations to come.