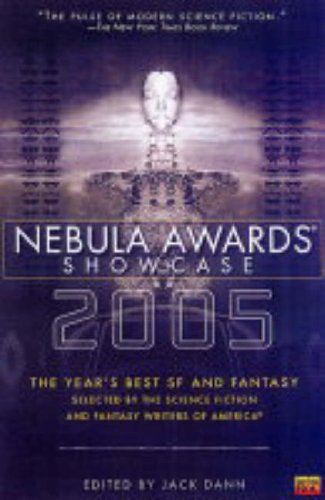 Jack Dann picks up the editorial reins from Vonda N. McIntyre in the Nebula Awards Showcase series. There’s a lot of high quality fiction in this volume, and the only real beef is that the stories are from 2002, which means that in a number of cases you are reading stories which appeared in the Year’s Best anthologies two years ago.

After a short introduction and listing of the awards, the fiction gets underway, with relatively lengthy author introductions, which really gives added value to the volume. Richard Bowes ‘The Mask of the Rex’ first appeared in Fantasy & Science Fiction May 2002. When reviewing it in its original publication I wrote :

Linked, we are told, to ‘The Ferryman’s Wife’ from May 2001, although twelve months and about 100 short stories has got in the way of me recognizing characters from this story from the earlier one! I did review the previous story as being ‘an interesting start to a series’ and this very much continues in that vein. We are taken back to the 1950’s, with some flashbacks taking us further back, to a wealthy family in Maine. Through the generations there has been an important link with a cottage in a remote part of their estate, which houses a gateway to a dozen times/places, and which is guarded by the ‘Rex’, or a series of ‘Rex’.

The story was a runner up in the novelette category.

James Van Pelt’s ‘The Last of the O’Forms’ appeared in Asimovs in 2002, and I received it thus :

A chilling and macabre tale. A mutagen has been causing gross birth-defects, with ‘original’ species of animals a rarity. Trying to make an honest buck from this is Trevin, who has a travelling freak show/circus/zoo. Sadly the population is becoming increasingly inured against seeing such creatures, and the future for the show is bleak. Will Trevin stoop to exploiting his similarly deformed daughter?

The story gets across the Mississippi heat and the similarly stifling future for humanity fairly well, but I found the names of the mutated animals (crocomouse, tigerzelle) jarred slightly.

Carol Emshwiller’s ‘Grandma’ appeared in Fantasy & Science Fiction March 2002, and appeared in Hartwell’s ‘Years Best #6’, and I wasn’t overly impressed, stating “In a recent On Spec we saw Superman as being adopted by a Canadian Jewish family. Here the super/wonder woman is in her dotage, her superhero days long gone.”

Molly Gloss’ ‘Lambing Season’ appeared in Asimovs in July 2002, and collected in Dozois 20th, and I reviewed it :

Similar in feel to the preceding story (a Pat Cadigan story), in its thoughtfulness and depth of empathy portrayed. A female shepherd (I’ll refrain from referring to her as a sheperdess would bring up Little Bo Peep images) spends several seasons looking after her charges. She is happy in her own company, and when she meets on several occasions an alien who is evidently surveying the remote wilderness, she does not engage with it directly, but on a very ‘human’ emotional level does achieve an understanding and a connection.

Cory Doctorow’s ‘Ownzored’ appeared in Salon.Com in August 2002, and was the first of the stories in this volume which I hadn’t previously read, an omission I was pleased to be able to rectify.

Murray Swain is not having a happy time at work in his Silicon Valley job, and the only question is whether a breakdown or loss of employment is going to hit first. Watching his best friend fade away and die has been a bummer, and he is more than a little surprised when Liam is waiting for him in the car park. Liam is in the rudest of health, and Murray finds out that Liam has been the beneficiary of some very interesting DNA-dabbling by the military, which got him back on his feet at the very last minute. Liam is contagious – but the contagion is one that gives the infected person more control over their body’s natural processes than could be dreamt of. The question is how the two of them are going to make use of this ability.

An intriguing story, although for my money it tails off a little at the end.

A tale of the Goxhat, an interesting multi-bodied entity with a further multiplicity of limbs and facial features. A wandering poet of this race stumbles upon the scene of a massacre in the hills, one member rescuing a singleton infant. Upon taking refuge in the castle of a local lord, a poem is required in his honour, the absence of which will lead to severe penalty. Despite the attempts of a magician in the lord’s employ to sabotage the poem writing by inducing sexual activity, a suitably honorific poem is written and delivered, and the Goxhat poet escapes in the dead of the night.

An intriguing story, although I have to admit not finding the characters quite as enthralling as the author evidently does in her introduction to the story!

One joy for me was finding another Arnarson inappropriate reference (a previous review flageed up a mention of duct tape, silver party ballooons and decaff coffee etc.). In this alien environment, when the multiple bodied poet is bathing in a rock pool, a servant of the lord provides ‘soap and towels’ as if they were working in a contemporary health spa!

One major disappointment for this volume is that we don’t see Neil Gaiman’s Coraline in full, and the Best Novella Winner is only available in extract format. So I for one have yet to read it!

Best Short Story Winner – Karen Joy Fowler’s ‘What I Didn’t See’ was originall on SCI FICTION. The introduction to the story is fascinating, describing the links to ‘Alice Sheldon/James Tiptree Jr’ and her story ‘The Women Men Don’t See’. Fowler’s story is of a similar standard, although lacking any SFnal elements in the story itself!

Barry N Malzberg’s ‘Tripping with the Alchemist’ appeared in Fantasy and Science Fiction, June 2003, an autobiographical essay. I’m not sure at the moment as to why it’s in this volume?

George Zebrowski pays tribute to Author Emeritus Charles L. Harness, whose alternate history story ‘Quarks at Appomattox’ is reprinted. I’m not a big fan of AH a the best of times, and being British a story set at a crucial time on the American Civil War is not going to resonate in any way, so I’m rather left with a feeling of ‘so what’ as opposed to ‘what if’.

Adam-Troy Castro’s ‘Of a Sweet Slow Dance in the Wake of Temporary Dogs’ lulls the reader with its tale of beauty and love, AND THEN LETS LOOSE THE DOGS OF WAR! In a bravura piece of writing, there is an unsettling shift from an idyllic setting into noise, death, destruction, horror, horror and more horror as the grotesque SFnal conceit is brought into action. For the days of beauty and love are numbered – nine. And the price for those days are a single day of horror and mutilation, pain and death, before another nine days of beauty begin again, everyone restored to health. And for those living in that strange land it is a price which is paid willingly, but in silence.

The story appeared first in Imaginings in 2003, and its appearance in this volume will bring it to a deserved wider audience. The fact that the author cites this as ‘his 9/11’ story gives added resonance to the story.

Harlan Ellison’s ‘Goodbye to All That’ first appeared in McSweeney’s Mammoth Treasury of Thrilling Tales’, and is okay, but not worthy of a nomination IMHO. If you err on the side of finding Ellison a ‘professional blowhard’ (link) you will doubtless find the lengthy intro and the story itself irritates worse than a rectal itch in a spacesuit.

Jeffrey Ford’s ‘Empire of Ice Cream’ was Best Novelette and when reading it in Haber/Strahan’s Science Fiction : the Best of 2003, I merely noted it was ‘smooth’. You can read a much more erudite review here!