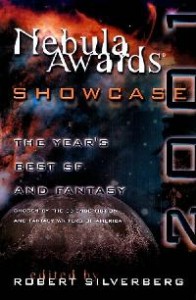 This volume is the 35th in the series, reporting on and making available the best SF as determined by the Nebula Awards for 2000, which voted on material published in 1999 and 1998.

Robert Silverberg looks back on the Nebulas and their establishment in the 1960s in his introduction, and then we are straight into the three prizewinners, and a couple of runners-up.

Published originally in Starlight 2 in 1998, and given a Years Best reprint by Dozois in 1999, it seems a little strange to be writing in May 2001 about this highly regarded story. I myself would put this in the highest echelon of short SF, a story deceptively simple and elegant, yet which bears re-reading. It is painful and yet uplifting, which is no mean trick, giving genuine pause for though in terms of the fundamental way in we perceive ourselves and our world.

This story beat the following stories on the final ballot: “The Astronaut from Wyoming”, Adam-Troy Castro & Jerry Oltion, “The Executioners’ Guild” by Andy Duncan, “Living Trust” by L. Timmel Duchamp, “Reality Check” by Michael A. Burstein, and “The Wedding Album” by David Marusek which gets a deserved reprint in this volume. On their wedding day a couple have a simographer create a sim as a memento of that day. The AIs created are trapped in that snapshot of time, and are rebooted and viewed in the same way that a photograph album is occasionally dusted off and viewed, which for them is a Groundhog Day horror. Will you ever play the Sims again, after reading this?

Winner: Best Novelette. Mars is No Place for Children. Mary A. Turzillo..

Published originally in SF Age, May 1999. The harsh reality of life on Mars, as seen through the eyes of a desperately ill child, whose parents, indentured to their eyeballs to get to Mars, have had to face the most painful challenges to gain and maintain their foothold on the planet. The personal intro gives an added interest to the story, which to my personal tastes suffers from the too-upbeat ending, but not enough to spoil the story.

This story beat the following stories on the final ballot: “Five Days in April” by Brian A. Hopkins, “Good Intentions” by Stanley Schmidt & Jack McDevitt (F&SF Jun 1998), “How to Make a Unicorn Pie” by Esther M. Friesner (F&SF Jan 1999), “The Island in the Lake” by Phyllis Eisenstein (F&SF Dec 1998) and “Taklamakan” by Bruce Sterling.

This story beat the following stories on the final ballot: “Ancient Engines”, Michael Swanwick, “Basil the Dog” by Frances Sherwood, “The Dead Boy at Your Window” by Bruce Holland Rogers, “Flower Kiss” by Constance Ash, and Radiant Doors by Michael Swanwick. Swanwick had the misfortune to have two stories as runners-up in the short story category. A repressive regime in the future is sending refugees back in time through radiant doors. Struggling to face the flood of traumatised refugees, a glimmer of hope suggests that maybe the future can be prevented.

Gary K. Wolfe’s essay ‘Unhidden Agendas, Unfinished Dialogues: 1999 in Science Fiction’ suffers a little (especially in the Internet age) of being a bit late in reviewing the year in question.

Harry Harrison provides a commentary on his old mate The Grand Master Award: Brian W. Aldiss, which is followed by the 40+ year old short story Judas Danced. Brian W. Aldiss which stands the test of time.

Barry N. Malzberg similarly reviews Author Emeritus 2000: Daniel Keyes, which is followed by an extract from Daniel Keyes’ Algernon, Charlie and I: A Writer’s Journey, and extremely interesting look back on how Keyes wrote ‘Flowers for Algernon’.

Some pomes finish off the collection, along with some information about the SFWA and past Nebula Award Winners.

All in all, and excellent volume – one which I would be happy to give to anyone who is sniffy about SF, confident that there is a lot of mature, high quality (science) fiction therein.