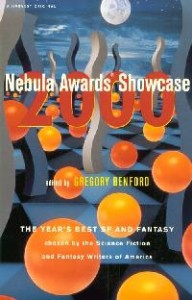 Alcoholic Lingster Ries Danyo, attached to the High Commission flees a riot with the butchered DepCom’s children. They stumble across solutions to some of the puzzles of the planet.

There’s no doubting the pedigree of this multi-award winning storyteller, but come on SFWA – Best Novelette? Not. A lightweight bit of whimsy about Peter Pan.

1998 Nebula Best Short Story. Hmmmm. There is one sentence in this short that makes it horror/SF/fantasy. You can even take that sentence out without affecting the story.

Far future, with a group of explorers from various races on a planet which has recently been razed by the feared and totally unknown Hand of God. The portal through which they arrived takes one of the human couple.