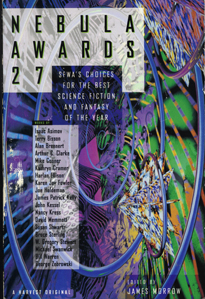 Kathryn Cramer’s opening review of 1991 notes that it was the year that SFWA changed from being the Science Fiction Writers of America to the Science-fiction and Fantasy Writers of America, and considers how that was symptomatic of a subtle change in SF(&F) in the genre.

The fiction opens with a resolutely science fiction story – Mike Conner’s ‘Guide Dog’, winner of the Best Novelette, ahead of ‘Gate of Faces’ by Ray Aldridge (F&SF Apr 1991); ‘Black Glass’ by Karen Joy Fowler (Full Spectrum 3); ‘Standing in Line with Mister Jimmy’ by James Patrick Kelly (Asimovs, June 1991); Jonathan Lethem’s ‘The Happy Man’ (Asimovs Feb 1991); ‘The All Consuming’ by Lucius Shepard and Robert Frazier (Asimovs May 1991). I hadn’t read this before, and Conner’s isn’t name that rang any bells. It’s a satisfying piece in which a human teenage boy is ‘sold’ by his family into the service of an alien, taking the role, in effect, of a guide dog. We follow his emotional journey as he gets to know his alien ‘master’, and see how human emnity amongst his peers causes his downfall.

In contrast, Alan Brennert’s ‘Ma Qui’ (F&SF Feb 1991) is a horror story. It won the Best Short Story, ahead of ‘They’re Made Out of Meat’ by Terry Bisson (Omni Feb 1991); ‘The Dark’ by Karen Joy Fowler (F&SF June 1991); ‘Buffalo’ by John Kessel (F&SF Jan 1991); ‘Dog’s Life’ by Martha Soukoup (Amazing Stories, March 1991); ‘the button, and what you know’ by W. Gregory Stewart (Amazing Stories June 1991). The story starts with a GI in ‘nam, somewhat peturbed to find himself evidently dead at the hand of the Vietcong. He realised that rather than The Big Guy upstairs looking after him in the afterlife he is in fact subject to the local superstition, and his role is that of being a dark harbinger. The denoument, in which he finds a comrade trapped above a fast flowing river, who can only be freed by the murder of a young child who will take his place, is memorable.

The fiction is interrupted by four touching memoriam essays in honour of Isaac Asimov. Typical of The Good Doctor – one of them is written by him. His is a touching epitaph, simple but affecting.

Next up is James Patrick Kelly’s ‘Standing in Line with Mister Jimmy’, one of string of nine nominations of Kelly’s, none of which won a Nebula. At the time of writing this (May 2007) Kelly has just moved to 1-9 with his excellent ‘Burn‘ (an award justified in its own right, as opposed to a cumulative sympathy vote.) An early adopter of IT, the intro mentions online information systems which anyone over 40 may well remember (CompuServ, GEnie, Delphi), but those of more tender years may only have covered in history lessons. As such the story could well have aged badly (we’re talking pre-Internet days to all intents and purpsoes). However the story, featuring an unemployed and workshy urban dude linked to his iPod-like AI, trying to be smart and avoid being conscripted to a central American hard-labor taskforce, could slip into the pages of a 2007 magazine without any editing.

Karen Joy Fowler’s ‘The Dark’ is a claustrophobic story. It doesn’t feature a proper narrative, but carefully and effectively explains the bare bones of a child raised by coyotes, who may, just may, end up with a role in the tunnels under the jungles and moutains of Vietnam, when a doctor who treated him as a child has to face up to the nameless horrors of the dark tunnels, and the role of the humble flea in humanity’s history and destiny is alluded to.

A lighter touch is supplied with Terry Bisson’s ‘They’re Made Out of Meat’, which explains Fermi’s Paradox.

John Kessel’s ‘Buffalo’ features an SF writer (HG Wells), and puts said writer in touch with Kessel’s father, enabling the two to jointly (but not successfully) and individually (again, not always successfully) face their futures.

More sfnal is Susan Shwartz’ ‘Getting Real’ which follows a young girl who is very much on the outskirts of society, who has just a chance of becoming a more substantial part of society. There’s a killer on the loose, and, ironically, being successful in becoming someone who is no longer unnoticed on the streets means that she is now on his radar…

W. Gregory Stewart’s ‘The Button and What You Know’ is very much a free-form experiment, much much closer to what is classified as ‘poetry’ in the genre.

Nancy Kress. Beggars in Spain (Asimovs, April 1991), closes the volume, the winner of the Best Novella, ahead of ‘Man Opening a Door’ by Paul Ash (Analog, June 1991); ‘Apartheid, Superstrings and Mordecai Thubana’ by Michael Bishop (Axolotl; Full Spectrum 3); ‘Bully’ by Mike Resnick (Asimovs, April 1991); ‘The Gallery of His Dreams’ by Kristine Kathryn Rusch (Asimovs, September 1991); ‘Jack’ by Connie Willis (Asimovs Oct 1991). It is of course a standout story, subsequently turned into a novel (and a sequel), and won the matching Hugo.

You can compare the contents of this volume to other rated stories for this year in Dozois 9th Annual Collection and the New Hugo Winners IV volume.