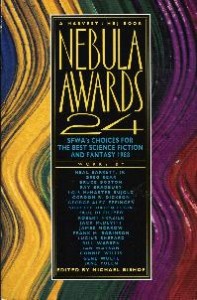 As with the previous year’s volume, Ian Watson provides a lengthy overview of the Nebula Award nominees for the year. He takes the opportunity to raise concern that a juvenile novel in the shape of Lois McMaster Bujold’s ‘Falling Free’ won the Best Novel Award, whilst other authors (such as Gene Wolfe with ‘The Urth of the New Sun’) were ‘scaling giant peaks’.

Editor Michael Bishop gives McMaster the opportunity to respond through an essay – ‘Free Association about Falling Free‘ – on her novel (as opposed to a novel extract). She makes it clear that the novel was her ‘commentary’ (ie homage) to the stories she read as a child – ‘her Analog story’.

Next up is a tribute by Greg Bear to SFWA Grand Master Ray Bradbury, which is followed by ‘The Collector Speaks’, a short poem by Bradbury, and ‘More Than One Way to Burn a Book’, an essay in which Bradbury considers contemporary censorship, somewhat more insidious than that in his Fahrenheit 451.

The fiction starts with winner of the Best Short Story in the shape of James Morrow’s ‘Bible Stories for Adults No 17 : The Deluge.’ Morrow’s ‘Spelling God with The Wrong Blocks’, a satire on scientific creationism, was a preliminary nominee the previous year, and which editor Bishop included in ‘Nebula Awards 23’. With this story Morrow provides a darkly satiric alternative view of the flood visited upon Earth by a displeased God (US: Big Guy Upstairs). As stated before, I’m not a big fan of fat fantasy novels, so I’m not that familiar with the fine detail of the original, but I’m sure that a raddled whore wasn’t fished out of the water by those on the Ark, nor did she ensure that she used the seed of Noah’s adult chlidren to ensure that she was quick with child and presumably able to begin the repopulation of the planet. This story won ahead of ‘The Color Winter’ by Steven Popkes, ‘Dead Men on TV’ by Pat Murphy, ‘The Fort Moxie Branch’ by Jack McDevitt, ‘Mrs. Shummel Exits a Winner’ by John Kessel and ‘Voices of the Kill’ by Thomas M. Disch.

Jane Yolen’s ‘The Devil’s Arithmetic’ was a children’s novella, which found its way onto the ballot in the Novella category. In her introduction to the final part of the novel (a good call by editor Bishop) she states that she was surprised at its nomination. To my mind, it’s not so much the fact that it’s a children’s novel which would be the issue, but the fact that it’s not SF. The story is a harrowing one about the experience of Jewish children in an extermination camp in the Second World War. Presumably to make it easier for children to engage with the story, Yolen uses a nominally sfnal device – a contemporary child somehow finds herself in that horrific situation, taking on the role of a young child in the camp. Such a device can be seen as helpful to an audience of children, but would not be necessary in an adult novel. Having said that, this excerpt is a painful read, the more so as it shows that alieness within humanity.

The winner in the Best Novelette category was George Alec Effinger’s ‘Schrodinger’s Kitten’ in which Effinger very effectively illustrates quantum theory through the eyes of a young arab girl, waiting, knife in hand, for a possible assailant. We see possible resolutions to the scenario, which include one in which she is rescued by a Westerner and lives a long life married to Heisenberg. The story won ahead of ‘Do Ya, Do Ya Wanna Dance?’ by Howard Waldrop, ‘Ginny Sweethips’ Flying Circus’ by Neal Barrett Jr., ‘The Hob’ by Judith Moffett, ‘Kirinyaga’ by Mike Resnick, ‘Peaches for Mad Molly’ by Steven Gould, and ‘Unfinished Portrait of the King of Pain by Van Gogh’ by Ian MDonald.

Jack McDevitt’s ‘The Fort Moxie Branch’ as a nominee in the short story category, and is a classy little tale of a struggling writer who is visited by a very strange library – one which collects novels which would otherwise lost works of fiction. He is flattered by the suggestion that the unpublished novel of his he is about to bin, is deemed worthy for inclusion in the library, but refuses the offer, determined to find a market for his work if it is truly of such a signal honor.

The In Memoriam section includes tributes to Clifford D. Simak by Gordon R. Dickson, and to Robert A. Heinlein by Frank M. Robinson.

A novelette nominee, Neal Barrett’s ‘Ginny Sweethips Flying Circus’ follows, typical of Barrett’s work. In a post-apocalyptic USA, an unlikely trio drive across the wilderness, offering ‘sex – tacos – dangerous drugs’. As you might guess, Ginny Sweethips is the ‘sex’, although exactly what she offers (is she human or android?) is deliciously unclear at the start.

By means of recognising Wolfe’s ‘Urth of the New Sun’, a nominee in the Best Novel Category, editor Bishop provides us with his Gene Wolfe’s ‘The Other Dead Man’ a v-e-r-y disturbing deep space horror story (have the move rights been purchased? if not, why not?). After being badly hit, the crew of a spaceship find their captain essentially brain-dead, and put him in a medpod. Reis is the senior officer, and should take command. He’s not entirely happy, but, worse still, neither is the ship’s AI, and Reis has to struggle against the AI in enforcing his command. But the AI has a few tricks up its virtual sleeve, re-animating the captain, who attacks and seriously injures Reis. Coming round in a medpod, Reis engages the AI in a final struggle. Those of you who regularly read horror stories would doubtless have picked up the twist in the tales’ tail, but I even forgot the title of the story, so engrossed was I in the reading of it, and missed that big clue. A great, compact story.

Connie Willis’ ‘The Last of the Winnebagos’ was winner in the Best Novella category, ahead of Bradley Denton’s ‘The Calvin Coolidge Home for Dead Comedians’, Jane Yolen’s ‘The Devil’s Arithmetic’, Norman Spinrad’s ‘The Plague Years’, Lucius Shepard’s ‘The Scalehunter’s Beautiful Daughter’ and Walter Jon William’s ‘Surfacing’. For those of you who don’t know, Willis’ story is a near-future one in which she vividly portrays the individual human loss which, as she says in her introduction, is often missing in post-catastrophe stories. In a near-future eco-shambles, mutating viruses have wiped out a lot of the canina population, the roads are jammed with huge water tankers but little other traffic, and (as per the title) the huge RV’s are an endangered species (no loss there, as the problem with such vehicles has got a lot worse since the story was written). A journo/photographer has to cope with the loss of his dog, and his relationship, and the owners of the Winnebago are in a perpertual state of grief over their departed dog.

The volume draws to a close with Paul Di Filippo’s ‘My Alphabet Starts Where Your Alphabet Ends’, which sings the praised of Dr. Seuss, and Bill Warren’s ‘The Year of the Pratfall : SF Movies of 1988’.

An excellent volume. You can check out how this content matches that of other volumes covering this year : Dozois’ 6th, Wollheim #1989, New Hugo Winners #3