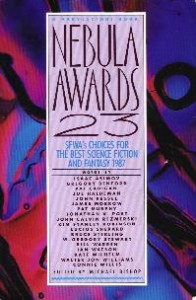 Editor Michael Bishop introduces this volume by praising the work by George Zebrowski over the previous three years, who ‘did much … to revitalize the Nebula Awards series’. My collection of Nebula Awards books isn’t complete, so I can’t comment on that, other than to say that the one prior to this issue currently in my possession, #18 ed Robert Silverberg, follows the pattern of the previous volumes in largely containing just stories with little in the way of story intros or other content. Certainly those volumes >#22 are considerably more substantial than the earlier volumes, and give a much more satisfactory reading experience due to the extra content beyond the stories (not that the stories necessarily are in need of any additional content!)

First up is Ian Watson’s ‘The World Renews Itself : a View on the SF and Fantasy of 1987’, which covers the Nebula Award nominees in some detail over 20 pages. Interestingly, amongst the nominees, Watson makes mention of two new writers, Eric Brown and Charles Stross, citing them as the kind of high energy writers SF needs, although he is somewhat sceptical about ‘how many drug-fixed, hot wired brains and bodies .. can we reasonably be expected to believe in’. Top marks for Watson in spotting Stross at a very early stage of his career.

Isaac Asimov provides a touching memoriam for Alfred Bester – touching if somewhat Asimovian in that the rememberances tend to feature the Good Doctor himself.

The fiction begins with Kate Wilhelm’s ‘Forever Yours, Anna’ (which won Best Story ahead of “Angel”, Pat Cadigan; “Cassandra’s Photographs”, Lisa Goldstein; “The Faithful Companion at Forty”, Karen Joy Fowler; “Kid Charlemagne”, Paul Di Filippo; “Temple to a Minor Goddess”, Susan Shwartz; “Why I Left Harry’s All-Night Hamburgers”, Lawrence Watt-Evans). Wilhelm’s story is a re-readable one in which a graphologist gets involved, intimately, with a love affair across time. The Hugo for the matching year went to Watt-Evans’ quantum burger story (supersize to the nth degree).

Bruce Sterling’s ‘Flowers of Edo’ follows, a runner-up in the novelette category, a sort of steampunk orient, is entertaining and evocative.

Another runner up in that category, but altogether darker, is Connie Willis’ ‘Schwarzchild Radius’, is which she juxtaposes the event horizon of a black hole (the Schwarzchild Radius), from which nothing can escape, with trench warfare in the First World War. The utter inhumanity of the front line troops as they are sucked in effect into the black hole of the Great War, is handled skilfully.

Walter Jon Williams’ ‘Witness’ is an equally dark tale. Runner up to Kim Stanley Robinson’s ‘The Blind Geometer’ in the Novella category, Williams takes comic book heroes of the Second World War era, and traces their post-war lives. Hollywood beckons, but McCarthyism awaits them. As the author states in his comments preceding the story, the fact that some of the dialogue he uses is virtually verbatim from transcripts of hearings which did actually take place is almost beyond belief. Another Williams’ story, ‘Dinosaurs’, was picked up by both Dozois and Wollheim in their matching Year’s Best volumes.

Next up is John Kessel’s ‘Judgment Call’, which didn’t get past the Preliminary Ballot stages of the awards, but which Michael Bishop exercises his editorial prerogative on behalf of. Written in 1987 and set in 1999, it follows a minor league baseball player who is given a chance to play in the major league. In a bar (Ground Zero on Delaware, which gave me a bit of a pause for thought!) he picks up/is picked up by a beautiful young woman. He gets much more than he bargained for, as she shows him more, much more, than you would expect from a casual pick up. His flashbacks to his youth give him a chance to reflect on his life, how he has got there, and where he is headed.

Lucius Shepard’s ‘The Glassblower’s Dragon’ is classic Shepard – more mainstream than genre, as a somewhat cynical well-travelled older man and a beautiful young girl come to an understanding as they part.

Winner of the Best Novelette award, Pat Murphy’s ‘Rachel in Love’ is one of the stories which would be in my Top 10 for the 1980s. A scientist implants his dead daughter’s brain pattern onto one of the chimps he has been raising and studying. The chimp, to all intents and purposes the daughter, is left to fend for herself once he dies. The story won the award against stiff competition from a strong collection of stories for this category : ‘Buffalo Gals, Won’t You Come Out Tonight’, Ursula K. Le Guin; ‘Dream Baby’, Bruce McAllister; ‘The Evening and the Morning and the Night’, Octavia E. Butler; ‘Flowers of Edo’, Bruce Sterling; ‘Schwarzschild Radius’, Connie Willis. The Hugo for the matching year with to UKLG’s ‘Buffalo Gals’.

After some poetry comes Pat Cadigan’s ‘Angel’, in which an alien outcast finds some solace in the company of an alienated human on some very mean streets. The faceless waitress, the silvery ‘manna’ exuding from the dying angel, are vivid images which will last.

Bishop includes Gregory Benford’s ‘Freezeframe’, a story which went ‘largely unnoticed .. by Benford’s peers’. It is a short story, built around a simple premise – high-achieving parents find it difficult to dedicate the time necessary to raise a child, and their solution is a chilling one – just thaw out the child when it suits them. It comes across as somewhat weak in contrast to the other fiction in this volume.

Kim Stanley Robinson’s ‘The Blind Geometer’ won the Best Novella Award ahead of ‘Fugue State’, John M. Ford; ‘The Secret Sharer’, Robert Silverberg; ‘The Tiger Sweater’, Keith Roberts; ‘The Unconquered Country’, Geoff Ryman; ‘Witness’, Walter Jon Williams. Robinson’s story is a fascinating one, the POV character being a mathematician blind since birth. He is at the cutting edge of some very complex n-dimension geometry, and he finds himself being used by a colleague and others to investigate some theory whose practical uses may have military applications. The world-view of the protagonist is expertly handled, down to some very clever handling of some of the story structure. A good year for Robinson, whose ‘Mother Godess of the World’ was a Hugo nominee alongside ths story, although Orson Scott Card’s ‘Eye for an Eye’ won the novella award.

Another story which made the preliminary ballot and which is included is James Morrow’s ‘Spelling God with the Wrong Blocks’, a satire on scientific creationism told through far future android scientists who land on a planet whose android population have taken Charles Darwin’s ‘Origin of the Species’ as Holy Writ, seeing themselves as very much the result of natural selection. The problem of their absence of genitalia is not one which they recognise (The Great Genital Coming awaits), and when the scientists prove too much of a nuisance, its time for the pitchforks, burning brands and the noose. Biting satire, sadly still very much relevant.

A strong selection of stories.