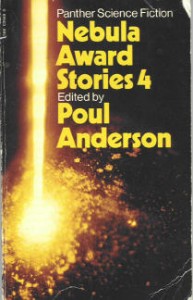 Celebrating the 1968 Nebula Awards, which had 18 nominated stories across the three short story categories.

Richard Wilson. Mother to the World.
Originally in : Orbit 3

Terry Carr. The Dance of the Changer and the Three.

Taut psychological drama, following the head of a team who has many years leading a SETI team monitoring the radio waves, as the project comes under financial threat, and his relationship with his wife reaches a head.