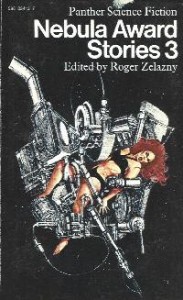 Celebrating the 1967 Nebula Awards, which had 16 stories nominated in the three short story categories. But not all the stories in this volume were nominees according to the SFWA Nebula Awards 1967 page. Go figure.

Vermillion Sands, and the portraits of Leonara Chanel.

Glogauer travels back in time to seek the truth about Jesus. Nebula Award, Best Novella 1967.

Lessa of Pern, from disposessed noblewoman to Weyrwoman to Ramoth the Golden.