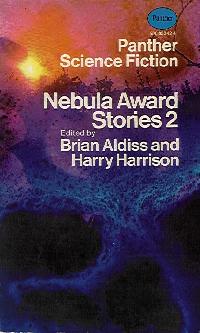 This volume, the second in the now long-running series, brings together the top stories for 1966 as voted by the august members of the SFWA. Whereas the ‘slate’ for the first year’s awards was a lengthy one, according to the SFWA’s 1966 Nebula Awards page, there were only 11 stories nominated across the three short story categories this year, and this volume has them all!

(Nebula Award, Best Short Story. 1966.) This story was found amongst the author’s papers after his death. The question “What did you do in the war daddy?” causes Duard to look back on his wartime experience, which is somewhat more obscure than most. Barker, Oregon, was the site of a geological survey, which sought to identify a possible source for a crystal of uranium oxide found by the body of a young man back in 1931.

Duard is left behind to do the final surveying, and local myth surrounding a lost mine captures his attention, as does the sister of Owen, the young man whose body set off the search. The girl, Helen, has only recently come out of a mute period, and Duard finds her difficult to communicate with.

But, out in the desert, he unearths the fantasy worlds which Helen and Owen played in as young people. Bizarrely, the consistent topography of their fantasy world is revealed to match the lower geological structures of the area.

Bob Shaw. Light of Other Days.

A veritable classic, in which a couple happen upon a small rural farm in Scotland selling ‘slow glass’. The glass, through which light takes a long time to travel, is highly sought after for decorative purposes. Through the windows of the cottage on the farm a blissful domestic scene is enacted.

A combat pilot finds himself alive after a bombing mission, against the odds. But it turns out that it was not just Lady Luck smiling on him, but there had been some other intervention. Years later another incident occurs. Who is looking after him, and why? The answer lies in the future.

R.A. Lafferty. Among the Hairy Earthmen.

One of the pleasures of reading volumes such as this, many years after their publication, is for introduction to stories such as “..although a newcomer to science fiction, (Lafferty) has developed a unique understanding of his craft..” The introduction also points out that the author’s preferred title for the story is ‘A Pride of Children’ which is far more in keeping with this elegant story. Far future children sojourn to historical Earth for their afternoon play. The play is that of Gods, and they wreak death and destruction upon the planet.

(Nebula Award, Best Novella, 1966.) Another well-written story. Earth is populated by elegant gentle-persons, living in castles, with alien Meks attending to their needs, and other aliens, Phanes, their playthings. The refined humans, themselves returned from galactic travels, find it unsufferably rude when the Meks revolt, and attack the castles. Most would rather die than debase themselves by fighting. But a minority still have it within them to make a stand, and, with assistance from other humans who live outside the castles, and another bird-like race in their employ, turn the tables on the Meks. Vance paints a vivid picture.

A short short story, describing far far future romance, love, and life that is one the one hand quite far from human, but on the other, still recognisably human.

Sonya Dorman. When I Was Miss Dow.

Another strange future, in which aliens intfiltrate into human bodies, although they find the two-lobed brain difficult to worth with. One alien comes close to a human, and struggles to retain her identity.

(Nebula Award, Best Novelette, 1966.) Well crafted fantasy tale. A Prince, destined to be Emperor, is sent to Earth by his father. Kyle Arnam is given the task of escorting the Prince through the rolling hills and countryside of Earth. The Prince finds the people of Earth, who retain many of the old ways of doing things, an anachronism, and the visit a chore. But the visit turns to be a dramatic one.

George Henry Smith. In the Imagicon.

Virtual Reality proves an escape for Dandor from a real life which… (ah, that would be telling).

Philip K. Dick. We Can Remember It For You Wholesale.

It proves difficult to read without imagining Arnold Schwarzenegger in the lead role in the film Total Recall. In the short story Douglas Quail lives a humdrum life, yearning to visit the planet Mars. He finally yields, and visits Rekal Inc., and a very subtle onion-skin is peeled. What is reality? And what is not? And is what is revealed at the end real? Or not? Excellent.

Erudite, proto ‘New Wave’ SF from the British Grandmaster of SF. Jack Westermark returns from Mars, sole survivor from the crash landing. But he is exactly 3.3077 minutes ahead of the rest of the planet, casting him adrift from his wife, family and future.

Eleven uniformly excellent stories, covering most topics you might expect to see : time travel, far future, virtual reality, New Wave, and fantasy. What is perhaps of note is the lack of ‘hard SF’, and the extent to which so many of the stories are fundamentally about humanity, about people. There are few stories that would not sit well in a current issue of Asimovs, F&SF, Interzone or the like. Don’t take my word for it, get a copy from your local second-hand bookshop or online.