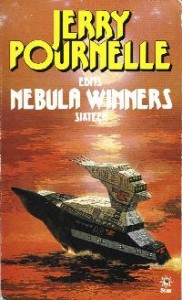 Full details of all the nominees on the SFWA 1980 Nebula Awards page.

Winner of the Best Short Story ahead of ‘Secrets of the Heart’ by Charles L. Grant (F&SF Mar 1980); ‘A Sunday Visit with Great-Grandfather’ by Craig Strete (New Dimensions 11 1974 [nomination withdrawn]); ‘War Beneath the Tree’ by Gene Wolfe (Omni Dec 1979); ‘Window’ by Bob Leman (F&SF May 1980). The story also won the equivalent Hugo.

One of Swanwick’s first two stories, each of which was well-received (the other being ‘The Feast of St Janis’). First contact with a spider-like race is made through a black hole thanks to the alien tech. Communication is not easy, and understanding their alien motives even more so.

It is possible to transfer humans (being carbon based) through the black hole, and Abigail is deconstructed, piped through the black hole, and reconstructed on the other side. Both the humans and aliens have shown some undesirable traits in the negotiations, and the question as to whether Abigail can really be seen as truly herself, and trustworthy, is an issue for the humans. However, the aliens have big plans for her, and she is offered the opportunity to be reconstituted severally in order to help them span the galaxy.

A female psychologist is fascinated by a client who claims to be a vampire. We follow her deep into the dynamics of her attempted therapeutic interventions and her growing emotional attachment. She finds out that he is indeed a vampire, albeit not a be-caped and be-fanged vampire, who preys on the low-life on the mean streets.

We get deep into the mind of the long-living vampire to a degree rarely seen outside of psychology manuals. Wish I’d known thought that the vampire had appeared in ‘The Ancient Mind at Work’ (Omni, 1979) the previous year, as I would have read that first!

Charles L. Grant. Secrets of the Heart.
Originally in :

Short horror tale featuring a young girl in an otherwise empty house. We find out what happened to her parents through some hapless travellers who seek assistance.

Other content in the volume includes commentary from Gregory Benford (in his role as winner of the Best Novel for ‘Timescape’, Michael Glyer, Bill Warren and Algis Budrys.