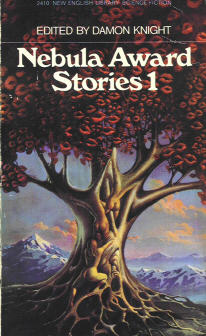 The UK edition, celebrating the winners of the first ever Nebula Awards back in 1965. Head over to the SFWA Nebula Awards 1965 page for a full listing of who won what, and who else was nominated. For the record, ‘The Saliva Tree’ by Brian W. Aldiss, and ‘He Who Shapes’ by Roger Zelazny *both* won the Best Novella category, with six other contenders in that category. ‘The Doors of His Face, the Lamps of His Mouth’ by Roger Zelazny won the Best Novella category, ahead no less than *18* other nominees. And ‘’Repent, Harlequin!’ Said the Ticktockman’ by Harlan Ellison won the Best Short Story category, ahead of no less than *26* other nominees. So this small volume offers but a representative sample of the fiction up for the awards! And at novel length, for the record, the winner was one ‘Dune’ by Frank Herbert!

So here are the stories in this volume, and my thoughts on them :

Roger Zelazny. The Doors of His Face, the Lamps of His Mouth.
Originally in : Fantasy & Science Fiction, March 1965

Rather shamefully, I am not as familiar with Zelazny’s work as I feel I ought to be. But, heigh-ho, that means that I have the pleasure of reading his SF yet to come.

In this story, Moby Dick is revisited on the oceans of Venus. Having previously come face to face with a dweller of the Venusian deeps, as a high-tech fisherman, and frozen, Carl has been reduced to the role of baitman : attaching the bait to the lure whilst in the sea. He has to face up to his previous failure, and the failure of his marriage, in one cathartic voyage. Can he battle the inner demons and that which lurks beneath the waves?

In comparison to the other authors in this volume, a somewhat lesser known name. A quick check on the Internet Speculative Fiction database shows Schmitz to have written a fair number of short stories from the late 1940s onwards, with only two novels (aside from a few story fix-ups). Of these the first, ‘The Witches of Carres’, was a Hugo nominee in 1967, and was placed 46th in Locus Magazines’ 1998 ‘All-Time Best SF Novel before 1990’ award (down from 31 in 1987).

Here we have a nicely observed alien setting, in which human settlers have achieved a nice balance with the local flora and fauna. This relationship is threatened my mendacious lumber merchants, and the planet reacts to that threat through the means at its disposal.

Now this is a story I can read, and read again and again. Short and pared to the bone, if I was editing an SF magazine, I would be tempted to staple a copy of this story to rejection letters as an example of what a short SF story should be. A Hugo and Nebula winner, and its themes of oppression and conformity are as pertinent today as they were forty years ago.

Roger Zelazny. He Who Shapes.
Originally in : Amazing Stories

Another story which stands the test of time. A near future psychiatrist is using what we would now call Virtual Reality to work with clients, creating, and shaping, scenarios which he watches and guides them through, the better to identify and treat their neuroses.

A blind psychiatrist, female and attractive, comes to him for help. He is warned that her lack of visual experience will cause the reality he shapes to threaten…

Yet again, a story which could be reprinted today with only minor changes. A computer at the Book Club believes that a subscriber owes money for Robert Louis Stevenson’s kidnapped. Things go from bad to worse, as this is soon picked up by the police computers as being a kidnap case, and, furthermore, as computer searches show that R L Stevenson is dead, it becomes a murder case. Just how far can this nonsense go, ponders the unfortunate Book Club Member…

One of the very first of Niven’s published stories. A mission to Venus runs into technical trouble. Is it a computer malfunction, or a psychological problem with the human-based AI?

A lovingly crafted pastiche/homage to H.G. Wells. In rural Norfolk (not many moiles from where your correspondent writes this), at the turn of the century or thereabouts, two young men of independent means witness a falling star. Or is it perhaps visitors from space, far more intelligent than us and about to enlighten us in socialist ways?

They are right up to a point – but when the visitors (amphibious and invisible) begin to encourage rapid growth of the stock on the farm, and the farmer’s family, and partake thereof, the narrator (himself corresponding with Mr. Wells) must take action. Being Victorian or thereabouts, the action is somewhat at a more gentle pace than would be the case nowadays.

J.G. Ballard. The Drowned Giant.
Originally in : The Playboy Book of Science Fiction

Another deceptively simple story, which sticks in the mind. The corpse of a giant is washed ashore, and we have a detached description through the eyes of an observer of the body – a lovingly detailed description, stressing the humanity of the creature despite its size. The body is gradually butchered and reduced by souvenir hunters, and we are left with a Ballardian image of a few ribs poking up on a deserted beach.