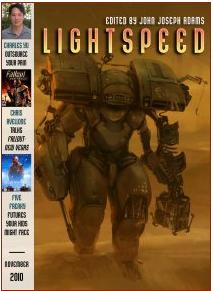 Originally in the anthology ‘Stars’, which was themed around Janis Ian, the story reflects this in opening with a quote from the Janis Ian song ‘Jesse Come Home’, and finishing with a plaintive cry of loss to the same effect in an alien tongue.

To get to this closing point, the story very effectively follows a human ‘medician corps’ who land on an outflung human colony planet to find the colonists fallen victim to a virus – whilst the majority of dead, the remainder are suffering from “limbic seizures with impaired sensory input causing Charles Bonnet syndrome” which offers a conundrum to those who are there to help. As the colony is not in fact in danger of extinction, is it a moral or a medical call as to whether the state in which the colonists live (a nirvana in mostly blissful ignorance of their surroundings) one that should be treated, or one that is in effect a cultural norm?

The main character, long in the field, has to make her decision as to what she does, and doesn’t do, in a very effective piece. It’s a story I read some years ago in a Year’s Best anthology, and was glad to find the time to re-read it – bizarrely time provided by being stationary on a motorway for an hour and my mifi and iPad providing an opportunity to do some online browsing.

There’s also a short, added value, interview with Kress in which she relates some background to, and thinking behind, the story.