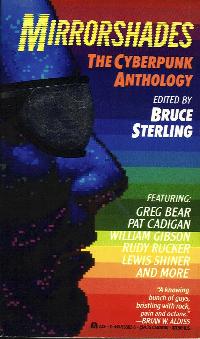 I’d been aware of a gap in my short SF collection, but, as they, all good things come to those who wait, and so when a pristine pbk copy of Mirrorshades appeared at the New Worlds bookshop on Charing Cross Road a month or two back, I rectified that omission. As I had recently bought the Pat Cadigan edited ‘The Ultimate Cyberpunk’, which was published in 2002, I decided to read them both, and to ponder Cyberpunk from a perspective of almost two decades.

Worth noting that whilst the ‘Cyberpunk’ movement came to prominence in the early to mid 1980s, my reading of any kind of SF was relatively limited and confined at that time to a few novels here and there, and my awareness of trends and movements in SF was virtually nil.

During the 1990s I began building my collection of Year’s Best anthologies, and so read some of the stories in these two volumes, but by no means the majority of them. I did make a point in my review in Feb 2002 of Wollheim’s 1984 Annual World’s Best SF that reading Asimov’s ‘Potential’, featuring the hoary old Multivac computer, immediately after Greg Egan’s ‘Blood Music’ in that volume, gave a very palpable sense of the old being overtaken by the new.

First up is Sterling’s introduction, and there are two things to mention

The introduction stands the test of time in remaining a good, succinct, description as to the whys and wherefores of cyberpunk. The danger of course is that now that cyberpunk is getting to the point of being of historical ! interest to the field, and an anthology hailed as a seminal collection will begin to be used by newer readers in the genre as a guide to cyberpunk. Worryingly to those authors who were leading-edge in the early 1980s that there are now young dudes 18 years and older who weren’t born then!

I’d read this story someplace a few years back, and in re-reading was pleased that my memory of it wasn’t faulty. First published in Terry Carr’s Universe 11 in 1981, it is deceptively affecting, and perfect in tone and content to get the anthology going. Obviously Gibson went on, with the novel Neuromancer, to write a defining, truly Cyberpunk novel. This is a horse of a different colour, an aching backward glance, a nostalgia for a future that SF had led us to believe that was coming our way.

The story is that of a young photographer, who finds himself catching glimpses of a future, a chrome, gull-winged, future as envisaged in the 1950s. Take a look at the cover of ‘The Best Science Fiction Stories of 1950′ to see what I mean. It was the future that most SF had led us to look forward to – with the exception of a few authors with a more dystopian, or dyspeptic view. But for the most part the consensus was that we would travel deep into the galaxy pretty much as we are now – (Biggles in space).

But domestic robots and jet-packs, and intergalactic space opera were seen by the group of writers coming through in the 1980s as not being a future that they could engage with. The clean-cut future, something out of Aldiss’ Brave New World, and visually something dating back to Fritz Lang’s Metropolis, obviously spelt out totalitarian, repressive, eugenic regimes.

And so, cyberpunk came along, with every aspect of life impacted by hi-tech, nano-tech, drugs, virtual reality, gene and gender modifiction. And all within a largely near-future near-space environment. Suddenly, in the 1980s that near-future was seen as having the potential to offer humanity the kind of challenge that was previously only envisaged by BEMs.

Originally in Omni, April 1986, and collected in Dozois’ 4th Annual.

Interesting to note that Ellen Datlow’s editorship of Omni is singled out as raising the profile of cyberpunk, and she is now leading the way on the web with SCI FICTION.

The protagonist is a combat veteran, who was enhanced to help with his airborne fighting. However, the conflict has ended, and he is back in society with this added functionality causing him problems. He sees the wiring in his head as a ‘snake’ and is concerned that it is having a deletrious effect on his sanity.

Not finding the Air Force any help, he visits a commercial scientific establishment in orbit. There, he has to come to terms with the fact that he can not blame the hi-tech in his head to the extent that he has, but that it is his deeper self that is causing the difficulties.

The powerful AI within the orbiting lab, offers more than a solution to his immediate difficulties, for it is in fact offering him and evolutionary leap.

Maddox’s view of the way into space, and the necessary sacrifices (ie sacrificing that which currently defines us as human) to get there, is a strong counterpoint to the EE Doc Smith Biggles-in-Space of the 30s/40s/50s (and 60s/70s/80s/90s/00s as some are still producing such yarns!)

A feature of cyberpunk is a greater engagement with the more youthful side of society – drugs, rock and roll and so forth. Here Cadigan introduces a rock and roll ‘sinner’ – someone who is a synthesiser. Not the brainy one in a band who can play and program the MOOG, but one who has a rare capability of enabling others to hook into them in order to make music.

The protagonist has fled her ‘mentor’, but finds herself being used again, this time by a group of wannabe musicians. But there is no escape for her.

Not a story which immediately leaps out as being ‘cyberpunk’. Sterling does cite Harlan Ellison as one of the influences of those writing in the sub-genre, and this is very Ellisonesque in its style and content. Simply put, Houdini is set increasingly fantastic situations from which to escape – to the extent of a nuclear bomb being dropped – and he manages, with brio, to continue his escapological feats.

More obviously a cyberbunk story – with a setting somewhat foreshadowing the beginning of Terminator I. The city gangs find themselves joining forces to face a most bizarre threat to their city. With the city virtually in ruins, a gigantic stomping neo-child brings them together. Laidlaw doesn’t explain the background, but gives a vivid picture of a near future gone badly wrong.

The intro to the stories identifies Kelly as not really being a radical hard SF writer, but one on the more literary wing. Certainly the class of this writer shines through in a story which interweaves the history of Stonehenge with that of a major celebrity, whose status is due to being a world-class creator of recreational drugs.

Against the mystical backdrop of Stonehenge, we see the main protagonists strange semi-incestuous/onanistic relationship with his clone begin to fall apart.

A new story to me, and whilst being an imaginative piece, not an obvious choice, as compared to the Hugo and Nebula winning ‘Blood Music’ published in Analog in 1983, which is widely recognised as one of the key stories in the evolution of cyberpunk.

Petra is set in a cathedral in which a calamitous event has enabled the stone gargoyles to mate with the nuns, and the cathedral is now a darkened place, hidden from sunlight, in which the half-breeds manage, after a fashion, to eke out a living.

The statue which was Jesus has a part to play, as does a love affair between a young human girl and a creature of stone. It is the final opening up of the cathedral to light which offers the residents of the Cathedral the chance to move on.

A strangely melancholic story, and certainly allegorical in terms of humanity being kept in the dark and failing to see the future.

For me, a better fit, if ‘Blood Music’ wasn’t to be included would have been ‘Tangents’, although that came out in Omni in January 1986 which may have been after ‘Mirrorshades’ had been put together.

And Bear’s ‘Hardfought’ from 1983 was a look at a far future in which humanity has evolved dramatically, and would be more in keeping with the Cyberpunk genre than ‘Petra’.

Shiner uses the breakdown of a marriage to set the tone for a story which concludes with the husband finding his future lies in the sea as a mer-man, creating a palpable sense of the next step in evolution.

A lengthy novel extract which is certainly cyberpunk through and through. The dark, neon, hi-tech setting reeks of Ridley Scott’s ‘Blade Runner’, but the story extracts lacks a little something, to my mind.

An early Di Filippo story, and its always a treat to read a mention of a young author as a prospect which turns out to be right.

Stone is a young man plucked from the ‘Bungle’, the Bronx Jungle, by a billionairess, and given the task of making sense of the society which has developed. The economy and society under commercial ‘Free Enterprise Zones’, which have replaced political structures, has little space for those at the bottom of the heap.

Collaboration was evidently a key element of the close-knit community of Cyberpunk authors. Sterling and Gibson’s ‘The Difference Engine’ was a notable success for me, creating a sub-genre – SteamPunk.

Here an orbiting spaceship is a setting against which political agendas are played out, and features a a memorable ending with dreadlocked anti-capitalism protestors promoting a viewpoint similar to those challenging the status-quo today.

A story which could appear quite happily in an issue of Asimovs in 2003. An earlyish take on the concept of time travel taking us back to quantum variations of Earth history, as opposed to our own history. And we see the full horrors of what would happen as the protagonist beds Marie Antionette and turns Mozart into a much more hip dude who has no reason to work hard to create his masterworks, as they already exist.

A cracking little paperback, which every self-respecting SF reader should have at home. The pbk version I have also features a neat reflective pair of shades (which my scanner totally fails to scan!). ;-)