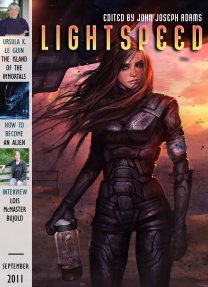 Online here, so read it!

A young man makes a (final) return to Earth and home. He’s been living on Mars, and has begun a process of change, embracing a three-way relationship with members of the alien race which has stopped off in our system en route to their moment of salvation at the centre of the galaxy.