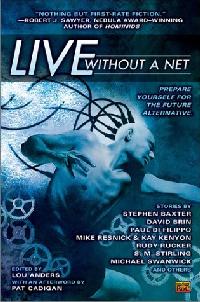 “Imagine a future without cyberspace…without virtual reality…without AIs and simulations…and without the Web” the cover of the book proclaims. “Explore a future without a net in these stories of alternatives to the ‘information age’.” Let us see what editor Anders has brought together…

Darger and Surplus first appeared in Asimovs (Oct/Nov, 2002) with ‘The Dog Said Bow-Bow’, and it impressed me – “wonderfully bizarre/baroque sort of futuristic-steampunk”, and, more importantly, those who voted it worthy of a Hugo.

Further stories have appeared and are promised, but this one takes us back to the immediate aftermath of the events of the original story. Darger and Surplus (the latter being a genmod dog who walks upright, talks and is otherwise human in his behaviour) have fled London, and are desirous of off-loading the deed to Buckingham Palace, which they have in their possession. They know that the deed is worthless, for the palace has burned to the ground, but in the age in which they live (some years hence, but technology has fallen back) they are ahead of the news of the demise of the property.

The cunning duo appear to have been caught out, when a new technological marvel threatens to deliver the news that will put a halt to their transaction.

A new author to me. Robeson takes us to an Alternate History, in which China dominates the globe. Their ancient ways, however, and under threath from the West : a steam-powered Analytical Engine.

The Chief Computator puts in train events which will remove this threat to the ancient ways, and to the humble abacus.

Yet another wildly inventive tale from di Filippo. He postulates a not-too distant Earth in which the vast majority of human have left Earth for the life amongst the stars. They have not abandoned Earth, but have left it in the hands of an AI embedded in the clouds, which is monitoring the Earth. On the planet itself are a few die-hard humans who refused to leave, and who have been denied hi-tech. The otherwise ambrosian life on Earth is looked after by Wardens, composite animals.

It transpires that the humans have in fact been breaching protocol and are suspected of posing a threat to the pastoral status-quo. Pertinax answers a summons, delivered at the beginning of the story in a wonderfully imaginative manner, and he and some of his fellow-wardens set off to challenge the human settlement. True enough, by use of hot air balloons the humans are planning on introducing the equivalent of a computer virus into the clouds and into the planet-spanning AI. It is down to Pertinax to save the day.

A shorter short story, in which humanity (it would first appear) have ascended to a plane beyond that which we occupy. Creatures of almost pure thought and left to ponder the meaning of ‘life’.

An experiment by a youthful, inquisitive being leads to the creation of a ‘computer’ in the form of a biological biped. But they have unlocked a Pandora’s box – or rather, the virtuality in which they exist and from which they have managed to exclude their creators.

A neat twist at the end of a clever story.

One of the less successful stories in the collection, for my money, primarily as Baxter has furnished another story set in his XeeLee sequence. As such it adds more to his future history, but doesn’t really engage with the theme of the anthology.

In the story a drone-like colony of Cadre Siblings finds their routine, and their life, shattered by warring human factions. Is the ‘freedom’ they are given any better than the ‘tyranny’ they endured. Or have they simply swopped tyrannies?

The author posits a post-war, pre-Internet, virtuality, in which it is the ‘ether’ which enables individuals to enter a virtual reality. A young woman, who was the first to be able to manipulate this shared dreamspace, finds love in the dream palace to which she is a guide. However, her virtual lover is a shadowy figure, and he is wanting more than love…

Mike Resnick and Kay Kenyon. Dobcheck, Lost in the Funhouse

Resnick and Kenyon deal directly with the theme of the anthology, in providing a future in which terrorist have brought the Internet to its knees. A replacement has been found – of a biological nature, in which DNA and the body itself encodes knowledge. However, the terrorists are fighting back, and Dobcheck finds himself nearly killed by a suicide bomber. But a moment, a slight human touch, enables him to rise above the tide of insularity that has been threatening to barricade himself (mentally and physically) against the outside world, and he is able to begin to engage once more with his contemporaries.

As one would except from Stross, a challenging vision of a relatively near-future. A farmer finds his farm, and his marriage, continually under threat. His wife has had a breakdown in the past, forcing him to reload her backup tapes. The talking farm dog is getting on, and, worst of all, he is under threat from a farm collective. Not a combine of farmers as we know it, but one in which a group of individuals have combined into a single biological entity, with the intention of travelling to Jupiter.

Joe’s wife finds the call of the collective too much to bear, and enjoins with the creature, leaving her husband with a choice to make.

A technological Crash has reduced humanity to nineteenth century, mechanical life. The cause is unknown, although related to a ship returning from one of the first hyperdrive missions. An esper has, buried inside his memories, some knowledge that may help us uncover the cause of the problem, and enable us to engage with the rest of the Universe.

Wrapped up in a dramatic kidnapping plot, the story crams just too much into a short space to work well. To my mind the kidnap element could have been easily removed, allowing full focus on the rest of the story.

Two scenarios, one cod-fantasy, one cod-SF, are presented, both finishing on a cliff-hanger. We then find these episodes are entertainments provides by a wizard, for his noble master. And his source of ideas? The SCI-FI channel. Hmmm.

A young Muslim, seeking truth and wisdom in Kabbalistic numerology, is poised to unleash upon the West a font-based virus that will bring the Net to its knees.

A group of children, a ‘cluster’ who share their lives and thoughts, come across a singleton living nearby. He was left behind when the rest of the non-cluster humans fled the Earth. The cluster of children is threatened with breakup as one of them finds herself attracted to him. She is tempted to leave with him, for a life with him, but the pull of her siblings is too strong.

The ‘cluster’ of cloned children is an intriguing one, and the singleton throws into relief that complex relationship, to provide a thoughtful story.

A particularly effective story, which echoes the likes of Orwell’s 1984, and Huxley’s ‘A Brave New World’.

The Machine in question is a calculating machine. But a human calculating machine, who is the only person who can carry out the complex maths necessary to program the orbiting weaponry to rain death down upon the enemy. In the barren, grey world in which he and his fellow men and women live, he commits the cardinal sin of falling in love with a fellow calculator. Through his calculations he has fallen in love with one who checks his work, and they have been exchanging messages in their code.

Challenging The System has fearful consequences, and the Machine is driven to an extreme action.

The way the story unfolds, and creates layers of depth and emotion, and the moral ending, is top quality. If I had to pick one story from this volume for a Year’s Best inclusion, this would be the one.

Shortish story, reprinted from Nature. The story does actually go against the grain of the book, as it is fundamentally about virtuality. A soft, sonorous, HAL-like voice talks to the reader, who is humanity, gradually, imperceptibly slipping the bonds of reality to enjoy the embrace of a virtual life.

Now Rucker, unlike Brin, does engage with the theme of the book. He creates a vividly real, and clearly different world than that which we inhabit now. It is Y3K and Earth is a luscious paradise, populated by strange, strange creatures, of which Frek is one. There are no longer machines, but a range of symbiotic relationships that have taken some of their places.

The story is projected as developing into a novel, and with a language redolent of Aldiss’ ‘Hothouse’ and a truly imaginary set of characters (no cod-fantasy here), and pastoral strangeness, Rucker has created something quite new and enjoyable.

David Hutchinson. All the News, All the Time, From Everywhere.

Another strange tale which engages with the theme of the book. Something strange is happening in England, as newspaper journalists are reliant on obtaining news from reading the entrails of dead animals. The cause? A Technological Crash, as one might expect, although the cause (Elves) is an unexpected one. For Earth has been reclaimed by one of the older races, and humanity has to learn to live, if not to love, the fey folk of lore.

An intriguing glimpse into a strange situation, leaving the reader wanting more.

Great stuff from Meaney, from the opening paragraph in which Trafalgar Square is under threat from a Heinkel. But not a common or garden Heinkel, c1940, but a dragon bearing the swastika and raining down bombs more horrific than we saw sixty years ago.

Against that out of kilter war there is a love affair straight out of the movies of that time. And those lovers, knowing that time may be short, enter upon a dangerous mission deep behind enemy lines. The science behind the story is not from quite the same quantum reality as ours, and dark, dark horrors are being developed.

Not alternate history, not quite, and not quite Lovecraftian. But a ripping yarn.

John Grant. No Solace for the Soul in Digitopia.

A series of quantum realities driven, not by love, but by sex (and explicit sex at that!). No solace for the soul, and no respite for the sexual organs.

For me the best picks from this volume are those where the authors really get to grips with the idea of a future that has not followed the usual technological route, particularly Di Filippo and Rucker. On the more traditional SFnal front Melko and Del Stone Jr provide more than the bigger names of Brin and Baxter (who don’t really address the issue the book is addressing, other than by being stories not specifically about virtuality, AI, web etc). Resnick/Kenyon, Hutchinson, Meaney and Stross provide top quality stuff.

All in all, an interesting varied collection, and well worth the shelf-space.