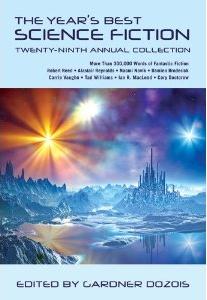 Having just finished reading Tidhar’s Strigo in Interzone #242 Sept/Oct 2012(reviewed here), which followed on from ‘The Indignity of Rain’ from Interzone #240 (reviewed here), both good reads, I realised I had this story to read in the latest Dozois and promptly read it.

This story is, like the two Interzone stories, part of Tidhar’s ‘Central Station’ sequence, and indeed, ‘The Smell of Orange Groves’ finishes with a meeting which is subsequently replayed, but from the other protagonist’s perspective, in ‘The Indignity of Rain’.

As a standalone story though, this story if fine enough, looking at Boris Weiwei, and how the memories of his grandfather are echoing down the generations. The society that is painted in Tel Aviv/Jaffa, the various religions, the daily lives, and above all the sensual believability of the city give the story a richness.

Excellent stuff. Have a read of the story in Clarkesworld, then get yourself copies of Interzone – either the sleek, new smaller format magazine, or an e-version, and read the subsequent stories.