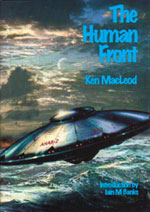 MacLeod is an author with whom I am not at all familiar. The Scottish writer has published several novels since the mid-1990s, and this would appear to be his first shorter-length publication. Iain M. Banks in his introduction, warmly recalls their early attempts at writing some two decades ago.

The story in hand is an interesting one. It starts out evidently as Alternate History, following the life of a young Scotsman, John Matheson, in a world in which the outcome of the Second World War was quite different. For those of you with a limited knowledge of post-war Europe the story may be somewhat confusing – certainly as confusing as I find Alternate History stories set in the USA. Suffice to say that the USA and the Soviets are still at loggerheads, and it is Stalin’s death (he early survived the nuclear bomb dropped on Moscow by dint of not being in the city) in the mountains of the Caucasus at the hands of American soldiers which kicks the story off. The domination of the superpowers is also threatened by a pan-national movement – the Human Front, fighting for a global free humanity.

Sufficiently unsettled by the shift in history, the reader is then put into the situation of having to assimilate the crash-landing of a very strange bomber on an airfield. The ship is a flying-saucer, a peculiar craft whose development has been shrouded in a haze of mystery. The young boy witnesses the pilot being removed – a young child it would seem. But the boy is sworn to a most urgent secrecy.

As he grows up, John finds himself drawn to the Human Front, and becomes a guerrilla leader. An attack on a railway line goes from being a huge success to a desperate failure when one of the flying saucers arrives to tip the balance in the battle.

And here the story pitches into yet more bizarre territory, with John and his colleagues transported by the flying saucer to a most un-Earthlike location.

They are esconced in what amounts to a POW camp, with their captors the tall ‘Venusians’ and squat ‘Martians’. The story quickly rattles through to a conclusion in which all is revealed. (SPOILER: the Venusians/Martians are in fact far-future time travellers from different threads of Earth’s past/future. John meets and settles down with a woman from a version of history which the reader would recognise as ours.)

All in all a story which is at times quite powerful and grittily believable, although I think the story could have benefitted from greater length.