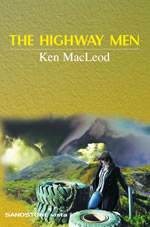 I was more than surprised to come across this book in a pile of books belonging to my wife. She’s a librarian who job is to pro-actively promote the use of libraries in Essex, and this includes adult literacy work and promoting reading to those who very rarely read, either through being less fluent in reading, or simply not having the time to take on a lengthy novel.

Just launched are a series of books sponsored by the Highland Council and Highland Adult Literacy Partnership, with advice from Essex County Council, aimed at ‘readers with differing levels of reading skills, from the emergent to the accomplished’.

At the top of a pile of these books on our kitchen table, was this particular title. Ken MacLeod has produced a string of well-regarded novels, none of which I have yet got round to reading, with only his recent short stories ‘A Case of Consilience’ (Nova Scotia, 2005 – BestSF review) and ‘The Human Front’ (PS Publishing 2000 – BestSF review) crossing my desk. As MacLeod states on his blog, it’s a ‘short SF novel set in a future Scotland (typical MacLeod stuff: climate change, imperialist war, libertarian grouch, Highland romance and insurrectionary violence’.

A ‘short novel’ is stretching it somewhat, as its 70 pages of large typeface on widely spaced lines, and by my reckoning it would struggle to count as a novella. But it hits the spot in terms of not being written down at all, and is, as he says, a full-on MacLeod story.

The ease of reading is helped enormously by the fact that the story is told solely through the viewpoint of a ‘lagger’ – someone ‘too dumb to draft’ in the Army and who are instead tasked with lagging pipes, and is written entirely in his voice, with no info-dumping or author asides.

The draft is an issue as the near future setting involves being at war with China (sparked off memorably by an air rage incident involving someone lighting up a cigarette). The lagging is necessary because climate change is making Scotland even colder than it actually is (if you can imagine that!)

Jase is leading a crew of laggers through the Scottish Highlands, and MacLeod effortlessly paints a picture of how society has changed in the light of the war, climate change, and government intervention, in a setting that he clearly holds close to his own heart. Picking up a young female hitch-hiker, Jase is intrigued when he drops her off and she heads away into the wilderness. Spending a hard-earned rest day tracking her down, he finds her living with a small group of disparate types who have opted out and are attempting to become self-sufficient in the face of the pessimistic global outlook.

He has them marked down as a somewhat naive group of idealists, but when he inadvertently sets the forces of law and order on them, Jase finds out just how far they are willing to go in support of their beliefs, and he himself is challenged to choose with path he is to take, and that whilst he is ‘too dumb tae draft’ he’s not ‘too feart tae fight’.

This is a cracking little book which will hopefully act as an introduction to SF to some readers who would otherwise not browse the SF shelves of their bookshop or library. It also deserves a wider audience, and could well appear in one of the Year’s Best anthologies next year.