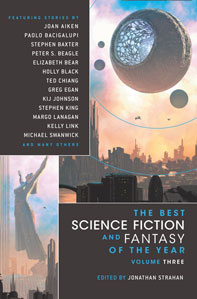 Strahan closes off his Volume 3 with a very classy story by Kelly Link, although if you were pedantic you would say it was horror rather than fantasy.

It’s cleverly structured, with two stories having their narratives entwined – until the end, when a third, meta-perspective concludes the stor(ies). Inasmuch as the stories are concluded, as the endings are left to the reader. The opening, initial narrative features a young girl who sleepwalks her way into danger, going out into the ocean and being caught in a riptide, only saved by a surfer dude. She falls in love with him, a love unrequited, and indeed, rebuffed over the years. To make matters worse, his sister marries her uncle. However, there is more to him than meets the eye, as we are forewarned in the other narrative, whose characters are reading this story.

The other narrative features a group of teen girls, the ‘Pretty Monsters’ of the title, as one of the gang of friends submits to an initiation ceremony that each has to go through. Each ceremony – they call it an ‘ordeal’ – is different, and this young girl has the misfortune to have her ordeal planning by a girl who has taken dislike to her mother, and who therefore intends the ordeal to be as big for the mother as her daughter.

Both narratives are handled beautifully, the relationships between the characters, the family members, all believable and engaging. As the stories progress, the themes of identity and persona, and hidden secrets gradually become increasingly clear, with mounting lycanthropic horror, although that horror is always off-stage.