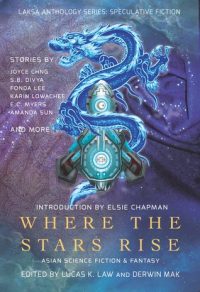 A good read, although if you’d asked me after reading it what the theme of the anthology was from which it was taken, ‘Asian SF and Fantasy’ would have been a long, long way down the list of suggestions.

We follow the story of Paris, from his earliest traumatic memories, of being left for dead, his parents and brothers dead beside him, through being picked up and saved, then fostered. The memories of the murderous visit by a dead-eyed ship’s captain and his crew are ones that affect him badly, and his foster parents finally give him up to an altogether riskier future, aboard a barely legal pharmaceutical trading ship. And, still troubled by the ghosts of the past, he finds one ghost very much alive, leaving him to make a choice….

Maybe missing just that little indefinable *something* to make it more than a good read – Paris’ viewpoint is handled well, and there are some interesting settings, but there isn’t that much interplay between characters.