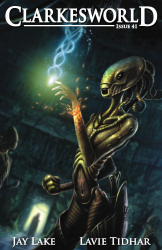 The new regime on Best SF is already paying dividends on account of my having read this story, which would not have otherwise happened (at least, until it’s appearance in a Year’s Best next year).

Lake creates a tight drama in the claustrophobic confines of an orbiting habitat. There’s a lot of detail and background to the story which give it a rounded feel – it’s evidently part of a bigger piece of work, which will be worth looking out for. Spanich Domitian is working on Mare Ibrium {13 pairs}, a supraluminal yacht of the type rarely seen in his sector. He’s working with the shipmind to fix a problem with the quantum pairs which work the drive, but isn’t quite sorting out the problem, and stands down from his shift. He broods in one of the bars, and is pleased to find one of young guys who cruises the hab is in the mood to hook up with him. However, young Austen has an interest in the Mare Ibrium {13 pairs}, which Spanich isn’t able to tease out of him, despite a sweaty night in the cramped sleeptube they share.

In the morning though, there is a call from a high-ranking official – a very, very high-ranking official, and suddenly Spanich is summoned onto the yacht, and finds himself way, way out of his depth. With the young Austen by his side, the nature of his young companion is revealed, and Spanich finds his prospects dwindling rapidly.

The backdrop, hinted at on a galactic level (they’re in a ‘post-Mistake’ universe), with genetic modification, and privilege and status to contend with, is a mature one. The same sex relationship is a refreshing change, and it’s an altogether satisfying read.