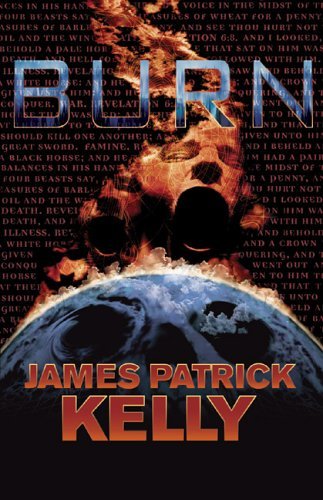 At 160-odd pages this chapbook from Tachyon Press comes across very much as a short novel, with its striking cover. If I’d read the novella without knowing who had written it, I might have put Paul Di Filippo at the top of the list, perhaps followed by Cory Doctorow. It has a strange quality to it, an sfnal story but with something just slightly askew – I was minded a bit of Hayao Miyazaki’s ‘Howl’s Moving Castle’, with its manga overlay of a western story. It is a properly multi-dimensional story, and it may be this complexity that is unsettling as it is not that common in a lot of SF. Kelly weaves these elements together to good effect.

The plot revolves around a young man, Spur, recently mentally and physically scarred from fighting a forest fire, who finds himself having to again face down his personal daemons when his village is threatened by another fire.

The political background is that the fires are being set by the indigineous population of the planet, Morobe’s Pea, resisting the forestation that is forcing them onto the retreat, and Spur has to come to terms with how he and other settlers have impacted on their new world, and how their reactionary, self-reliant, inward-looking society has cut themselves off from the rest of humanity (hey, lucky that this is sf and nothing that like that could happen here!)

The societal background is that the new settlers are follower’s of the belief system of the new owner of the planet, Walden, who espouses simplicity in all things, and Spur has been having something of a crisis of faith in following the rigid requirements of simplicity.

The characters – Spur, his soon-to-be-estranged ex-wife, his father and close family friends back at home, the doctors helping him to recuperate, are all well drawn, adding to the richness.

But there is a further, very strange, element to it, which makes the story just that little bit skew-whiff. And that is the character of The High Gregory of Kenning, whom Spur contacts when idly searching for potential long-lost relatives on the ‘net. The High Gregory is a young boy, whose sole job in life is to bring luck to his people, and the furtherance of his own line. And the High Gregory is very interested to learn of Spur and his planet, and does indeed turn up to visit in a trice (the High Gregory is very much the kind of person to do things in a trice). And so Spur is discharged from hospital and returns to his village, with the difficulties in meeting up with his father, his wife, and family friends exacerbated by the presence of the enquiring High Gregory and his strange entourage.

Satisfying on so many levels, I’m at a bit of a loss as to why it isn’t up for a Nebula Award, as it is so far ahead of at least two of the novellas on the final ballot for this year’s award (taking place a few hours after I write this). For the record, the two up for a Nebula which I feel are so way behind this, are Bud Sparhawk’s ‘Clay’s Pride’ (“creaky old fashioned .. sf”), and Robert J. Sawyer’s ‘Identity Theft’ (review forthcoming or online here). Fortunately, ‘Burn’ is a Hugo nominee, and is also on the Locus Award shortlist, so the quality that this novella provides is recognised by them.

‘Burn’ is online at The Infinite Matrix, so why not head over there and grab a copy to suit your reading preferences? Or buy a dead-tree version from Amazon.