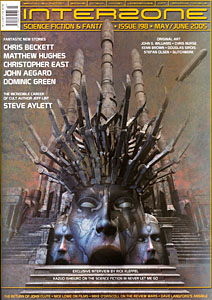 The eighteenth story of Beckett’s in Interzone, and one of the best that I have read. A near-future London is the setting, and for Clarissa Fell it is decaying, dark and lifeless. However, for the rest of the population, now uploaded into an Urban Consensual Field, the virtual London which they inhabit, still largely co-terminous with the bricks and mortar reality, is still a vibrant, brightly lit place. Clarissa is determined to visit Picadilly Circus, to see the lights she saw as a child – the real lights – and she is pottering into central London, her Implants enabling her, when she chooses, to be part of the virtual London.

Beckett effectively illustrates, as she flicks between the dark, lonely London which she inhabits, and the vibrant virtual London, that which will be lost when the virtual life replaces ‘real’ life – a process, IHMO, which we are already embarked upon, as there is an increasingly consensual ‘other’ reality coming at us (or at those who choose to receive it) from the media, which bears little resemblance to reality.

This story follows the well-established rote, in that typically the protagonist arrives with either a deadline or with a human team in place who are resentful of their presence. Here Kandler, and exo-sociologist has to solve the K’fondi conundrum with the administrator of the on-site Bureau of Offworld Trade pissed-off at his presence.

However, this story then moves away from the typically dreary linguistic/behavioural/etc musings which lead to the protagonist cleverly solving, in a matter of days, problems which the on-site team have been unable to do over several months or years.

Kandler is a bit more direct, and after observing the largely infantile behaviour of the K’fondi, attempts to ‘go native’, by shaving his head and painting himself purple, to masquerade as a K’fondi (they closely resemble humans).

Kandler thus makes contact, but more than that, is willing to give the K’fondi the technical secrets which have enabled Earth to have a monopoly on interstellar trade.

Kandler was made as welcome as a fart in a spacesuit by the Bureau of Offworld Trading at the beginning of the story, so you wonder just how unpopular he is going to be after this spectacular piece of species treachery!

Hughes’ two current series of stories in F&SF, one featuring Hengis Hapthorne, and the other set in a chant-transversed ‘noosphere’ tales have left me largely unmoved (the HH stories I now simply skip, and the ‘noosphere’ tales I skim-read). However this singleton, more sfnal and light on the humour, was more to my taste.

East follows up his ‘Puddy Buddy’ story last month with an intriguing take on VR – something that is not easy to do as there has been so much written in this sub-genre. The v9 in the title refers to version 9 – the ninth running of a Battle of the Bulge (WWII) scenario. X Company, of the 101st Division, are in the eightieth iteration, and are populated by simulations of the men who actually fought in the battles, and a range of aware an non-aware VR combatants, observers, and programmers. The protagonist (Glitch) is one of the simulations, who is becoming increasingly self-aware, forced to undergo variations on bloody death and injury, as others, new to the scenario are parachuted in.

As the battle approaches, Glitch is concerned at a newcomer, who seems unaware that what is happening is not real, as he lives (and dies) through the carnage that descends.

With the exception of the cheesy names (Captain Applet, Lieutentant Interface etc) which struck a discordant note, to my mind a more challenging take on topic which the much more pedestrian ‘The Cookie Monster’ by Vernon Vinge which won a Hugo a year or two back.

A Gormenghastian fable – but not a cod-fantasy, for in the stead of cod-pieces are plunder-pants. Evan Spandos is high-born, but travels to the castle of the Emperor to make petition for his true love to be spared from the battlefront to be with him.

Spandos must spend time in the bowels of the castle in order to make his petition, and I use the phrase bowels quite literally, as he is tasked with keeping the castle’s sewage system running smoothly (smoothly as in ‘no lumpy bits’).

The story illustrates an adage that the pain of the judged shall be on the judges, and Spandos sees the pain wrought upon the Emperor and those who judge by his side. The torment of the Emperor is great, as he is responsible for war, as is the suffering of sal-Jesic whom at first tests Spandos’ resolve through fire, but whom Spandos comes to serve and revere, as he realises that his own petition is a self-serving, worthless one.

Don’t be put off by the opening illustration, as the story is of a higher standard!

An interesting setting – a relatively near-future Africa, with that continent ravaged by civil war and hi-tech weaponry and ordinance. Mativi is a Weapon’s Inspector, and he is v-e-r-y disturbed at what he finds in the Congo – the locals have been disposing of increasing volumes of materials into ranked masses of machines, each of which contain a black hole at their centre. The setting, and the set-up are fine, but the denouement doesn’t quite reach the heights it could have. We hear of the potential damage that could be done should one of the black holes escape (memorably covered by Paul J McAuley in ‘How We Lost The Moon, A True Story by Frank W. Allen’). The rather blase treatment of a suicide of a Congolese official at the end jars, as does the use of the adjective ‘blacks’ at the beginning (“..made social parriahs (sic) of blacks all over Europe..”). Oh, and the illustrations…

A strong issue, with Beckett and East being the pick of the bunch IMHO. And the couple of iffy internal illustration don’t detract from the drop-dead gorgeous cover.